I met Mari while we were living at the Curley School artist’s revitalization project in Ajo in 2007. It was quite an adventure to leave the security of my full-time teaching job and Jim’s commercial photography business to move to the tiny and isolated copper mining town of Ajo, way down in southern Arizona, in order to pursue our dream of working full-time as artists. We were among a number of other artists who also took the plunge. One of them is Mari Kaestle.

Mari, too, moved to Ajo to pursue her dreams. This leap of faith follows a fascinating career in the arts. First of all, Mari has a fine arts education. She majored in painting and art history at Pratt Institute and the School of the Art Institute of Chicago where she received her BFA.

After graduation, Mari married David Kaestle, a graphic designer, and began her artistic path by focusing on illustration and design. In addition, she did some teaching.

Here comes the really amazing part. Mari met Jim Henson, the creator of the Muppets in 1974. He invited her to become part of his team. She was one of the group of artists who created Miss Piggy. In addition, she and her husband David created the concept and design for the “Art of the Muppets” exhibition, which traveled to museums around the country and around the world. If you don’t believe me, check it out at http://misc.thefullwiki.org/Mari_Kaestle.

Being the reserved and modest person that she is, I had to snoop around to get more of the goods on her career. After doing a bit of research, I discovered some additional information about Mari’s career. For one thing, she received an Emmy Award in 1980 in the Outstanding Individual Achievement category for her work on the creation of the Muppets. Not only that, but she was the creator of the characters in the “Land of Gorch” from the first and second seasons of Saturday Night Live. I admit that I never saw this (I’m lucky to stay awake until 10 p.m.) Who knows what else she “forgot” to tell me about this era in her life…

After her stint with the Muppets and other related adventures, in 1983 she took up with the Mattel Toy company, “designing dolls and product for girls during the last wave of creativity at Mattel Toys in Los Angeles,” according to Mari.

In 1997, in a turn toward her metaphysical side, Mari left the world of commercial art to began a career teaching art in a trailer at the Mount Madonna Center, an intentional yoga community in central California. She also put her creativity to use in designing costumes and sets for the school’s performing arts curriculum.

And that brings us, more or less, to Mari’s adventures at the Curley School. Mari says that “finding a form as a fine artist was a hard process. Design as a career is a totally different mentality from fine art. After several years of reaching into different mediums, I have returned to marionettes…and found great pleasure combining the many skills I developed as a designer and as a spiritual seeker. I’ve also begun to explore sculpting in clay for the first time since college.”

Justice standing on a balance beam

In 2010,  John Peck, co-owner of the Oasis Cafe (located in the former theater on the plaza), asked Mari to create something for the kiosk (former ticket booth). Always one to take on a challenge, the “circus” was conceived. The “Little Greentown Traveling Soul Circus”, an installation of marionettes in an environment, has brought her full circle.  “The concept results from my lifetime work, my interest in the tarot and yoga, my love of creating characters and stimulating the imagination of children and adults, and the challenge and fun of having a space solely committed to my work. Each marionette is a unique creative experience,” according to Mari, “The characters in the ‘Circus’ are frozen in space, but not in time, spirit, or imagination.”

“The marionettes represent the middle 7 cards of the major arcana of the tarot, or the ‘will of the soul’. These cards are: “strength, the hermit, the wheel of fortune, justice, the hanged man, death, and temperance”. They are posed in yoga postures related to the tarot teachings. The ringmaster or magician was an afterthought…representing unlimited creativity and imagination,” states Mari. 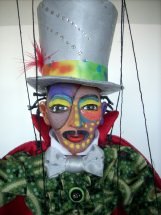 In addition to the marionettes, there is a sound track in process, created by the young Ajo musican Luciano Ramirez. The space will be lit imaginatively using a mirror ball to simulate movement.

Sometimes Mari works in a flurry of activity, other times she is slow and resistant… all artists can relate! It is a project that has grown organically, but very slowly. Knowing Mari, her work is impeccably crafted, wildly creative and, well, just plain wonderful.

By the way, Mari sent me the photos and information way back in February, I think. I’m embarrassed about and not sure why it’s taken me so long to get to this post. Possibly because I’m so in awe of her that I’ve been afraid of not being able to do justice to her remarkable life work! Let’s hope Mari will forgive me and send more photos of the project in its current state. Better yet, brave the heat and travel to Ajo to see for yourself. The Oasis Cafe serves a great cup of iced coffee, by the way.