I’ve been motoring on with my Olin Library series, a group of paintings about a wonderful Nook and Cranny at library at Kenyon College. Last week was a busy one, what with installing a show on Wednesday and then attending the opening on Friday evening. Despite essentially losing two days (well, not really, since showing and selling my work is part of my job description), I did manage to move the paintings forward. 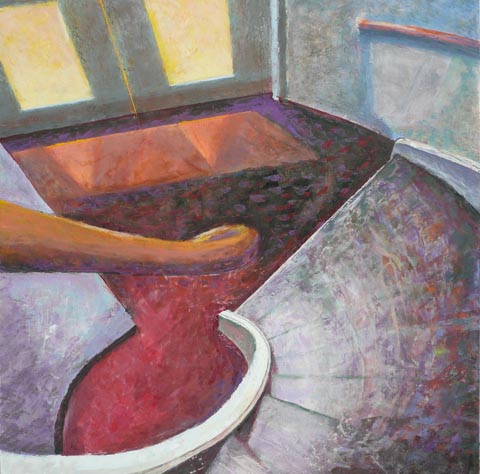 You’ll notice that something is missing. The bannister is there, but what the heck is holding it up? I’ve been postponing adding the railings because I’m not sure how I want to do them. And since once I start, I don’t want to have to move them around too much, since that would mean redoing the whole area. Up to this point in a painting, I’m more than happy to change angles, move stuff around, change proportions. But now that I’ve added lots and lots of layers and am getting happier with what I’m seeing, I’d like to at least be in the ball park with the placement of the uprights.

My brilliant friend, Sharon Brady, helped me out with the idea of using tape to map out the railings, take a snapshot, reposition the tape, take another snapshot and then decide which I like best. So I did. 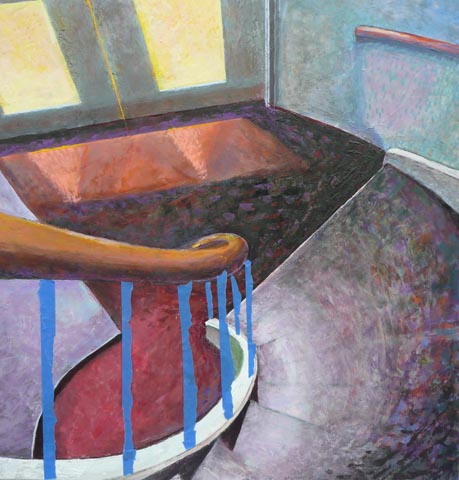 The bannister with blue tape indicating the placement of the railings, parallel to the edge of the painting 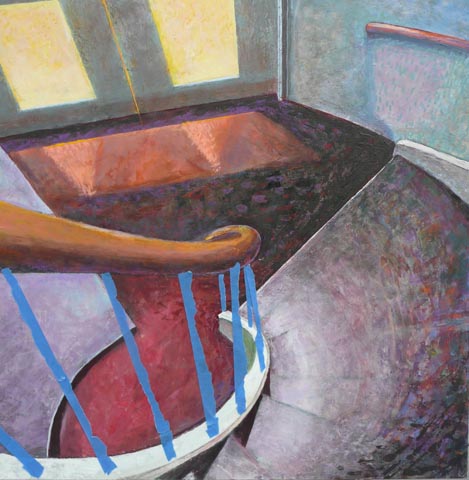 This is the next idea with the railings tilted, not accurate perspective

Again, after multiple tries with the tape, I came up with this. It makes me nervous because the perspective isn’t accurate, but I really like the way the tilted railings add to the movement in the painting. So I think I’m going with this. The good thing is that I can mark out where the tape is located before I pull it off!

Many thanks to Sharon. While it took me most of an afternoon to tape and re-tape and re-tape, it would have taken ten times longer to do the experimenting directly on the panel with paint.

And on to painting number 2. 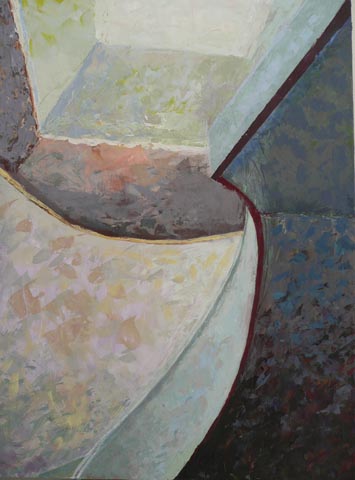 While I like the abstractness of the painting without the bannister and railings, I have a feeling a casual onlooker wouldn’t be able to figure out what they were looking at. And does that matter? Well, that’s a whole other conversation. 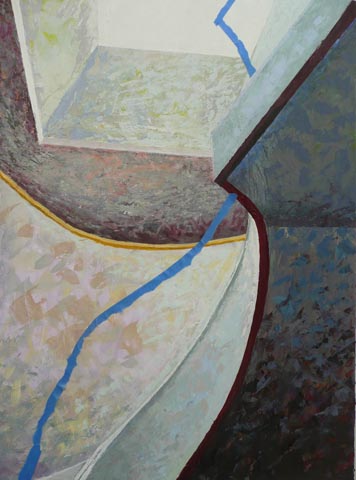 The bannister, sketched in with tape

At this point I was tired of dealing with uncooperative tape, so I didn’t add the railings. Now that I’ve had a chance to cogitate about it, I think the painting does need the bannister and railings to make it understandable to the viewer. And I think it will add to the gracefulness of the image. So, on to wrestling with tape to figure out the placement of the railings.