Years ago, I was fortunate to take some of my first art classes at Santa Barbara City College (although I didn’t know it at the time). Even more fortunately, I was there when Robert Frame was teaching drawing and painting at the school. One of his favorite phrases, which has stuck with me over the years was “let inspiration find you working”. I always wondered if he made it up or if it was a quote lifted from someone else. Before writing this post, I looked it up and it turns out the actual quote is “inspiration exists, but it has to find you working”, and is from none other than Pablo Picasso.

I’ll get to the reason I’m bringing up the quote in a few minutes, but first I’d like to pay a short homage to Robert Frame. Here’s the description of him on Wikipedia:

“Robert Frame is a consistent, prodigious and scholarly painter who has produced successful one-man shows and museum exhibitions yearly since 1951. Frame is widely known, admired and respected by both artists and collectors as a “Painter’s Painter.” His years of experience and versatility in painting are recognized by the truly sensitive, knowledgeable collector.
From 1948 to 1965, Frame won 22 prizes in painting in national exhibitions as well as a Guggenheim Fellowship in Creative Painting, and has been represented in numerous National Exhibitions of American Painting as well as many publications on art. As a well respected professor in fine arts, he has been influential in institutions such as Otis Art Institute, University of Southern California, Scripps College and Santa Barbara City College.

Frame’s paintings are a celebration of sumptuous color and painterly surface. His subjects are figures, landscapes, and interiors, saturated with light and vibrant color. To this he brings a strong, but understated structure. One thinks of Bonnard and Matisse when viewing his paintings, yet his work is intense and original.
Robert lived 1924-1999.” 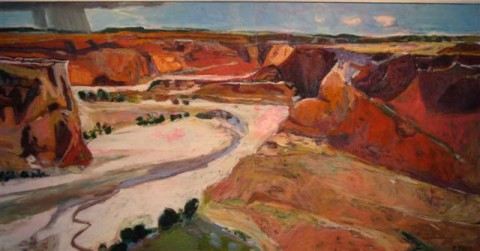 And from Anderson Shea Art Appraisals:

“Robert Frame (1924-1999)
American
Robert Frame completed his artistic training at Pasadena City College and Pomona College in Claremont during the 1940s. He studied under Henry Lee McFee and Millard Sheets, two of the most important California modernist painters of the period. He spent the majority of his career in Santa Barbara, California.
Frame painted a variety of subjects including figures, landscapes, and interiors. Modernist in his technique, Frame’s palette almost always consisted of vibrant colors. His proficiency with composition and color gained him acclaim in the artist community.

Frame received several awards in the late 1940’s and early 1950’s, among these were awards from The National Academy of Design in New York and the Pasadena Art Museum in California. Frame had public exhibitions at the National Academy of Design, The San Francisco Museum of Art, the Los Angeles County Museum, the Desert Art Museum and the DeYoung Museum.

Still lifes were a quintessential subject of Frame’s work. Depicting a flower still-life by a window was a subject often painted by the artist. His use of saturated light coming through a window is a typical characteristic of the artist’s style. Frame was utilizing modernist concepts such as loose, expressionist strokes and flattened almost cubist qualities.  Architectural in composition, he creates geometric forms and spaces. His palette is reminiscent of the Bay Area school of painters, such as Roland Petersen and Richard Diebenkorn, who used bright, pastel, primary colors.”

Robert Frame was the quintessential art teacher. He helped me to see and showed me how to make calligraphic lines when doing life drawing among other things. He set up incredibly difficult still-lives for his students to draw/paint. And when we got discouraged and frustrated, he’d push us to keep on. And when we didn’t want to, he’d say “Let inspiration find you working”. And inevitably it worked. He was generous with his knowledge of art and didn’t hold back in teaching what he knew to his students.

Which brings me to the point of this blog post. I’ve been discouraged and frustrated with the two paintings I’ve been working on. I’ve been ready to pitch them both right out the window. Or even better, into the garbage. Or to sand them down and start again. The large one is still driving me crazy. If it weren’t for the fact that it’s large and the canvas is expensive and I’ve put untold hours into it, I would take it off the stretcher bars, roll it up and quietly stuff it into the garbage. 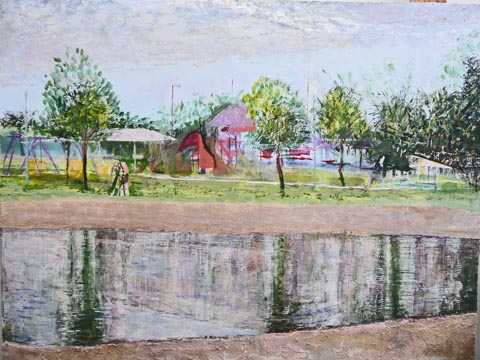 Believe it or not, it's looking better now than it has, but still NOT RIGHT.

Alas, I’ll motor on with it. 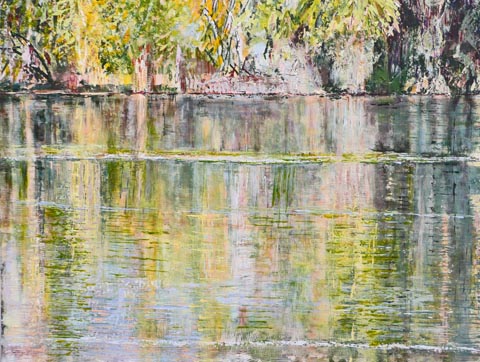 Not done yet, but better, much better

And this one has been such a battle. I was pretty sure that somehow I’d totally forgotten how to paint. And yet, on Friday as I forced myself to keep working on it, suddenly things began to happen.

Today, I’m ready to hop to it, jump right in and let inspiration find me working. Thank you, Bob Frame.