My Ten Seconds of Fame: My Snow Shovel and Me 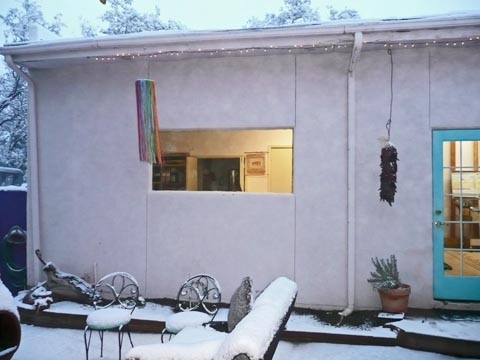 Snow in the courtyard, with a view of my studio. Looks warm and inviting in there, doesn’t it?

One morning just before Christmas, I was outside diligently shoveling snow from our massively large driveway. I was dressed in layers of clothing I’d literally thrown on, with a hat pulled way down over my forehead. I don’t think I’d even combed my hair, much less put on makeup. Well, the joke was on me. As I lifted a massive shovelful of wet and heavy snow, I looked up and saw a man with a large camera and tripod walking down the driveway. The nice young man asked if he could film me shoveling snow. He works for Channel 9. I assumed Channel 9 was some obscure TV channel, and figured that video of me shoveling snow would hardly be news worthy anyway and would likely never be aired. So I said okay.

That evening, I got a phone call from someone who had seen the segment (is that what you would call 10 seconds of TV?). Son Mathew came home from work saying that he’d gotten text messages from friends about my debut on television. And I got emails from friends who also saw the segment. Who knew? Well, not me, that’s for sure. We only get the Phoenix TV stations here in Oracle, so I had no idea that Channel 9 is a major network in Tucson. At any rate, wish I could say that I basked in my new fame–if only it had been about my artwork!

So just to add insult to injury, here is the clip. Watch at your own peril.