Moving Boulders in My Paintings

It started when my friend, the artist Sharon Brady, stopped by to critique my work. She liked the painting, but then after spending some time looking, something started to bother her. It was the boulders. They were all the same size and shape and were regularly spaced. Why hadn’t I noticed that before? That’s what artist friends are for—they can see things you can’t because you’re too involved. I’m grateful for Sharon’s input.

I got out my trusty sander, proceeded to get rid of the boulders as best I could and started back in. The domino effect of art took hold and before I knew it I was revamping the whole darn painting. In the end, it took me at least twice as long as a painting this size warranted. I think it improved the painting. I hope. 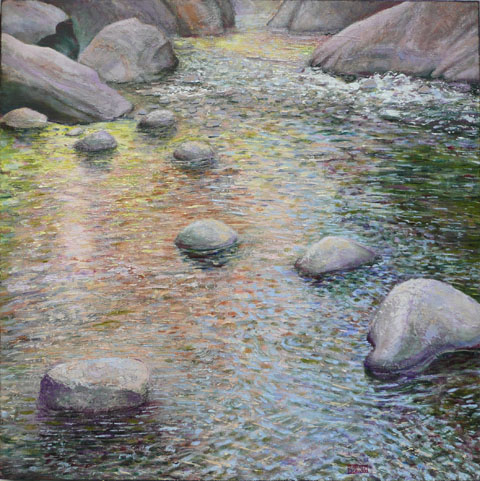 On the next painting I started the domino effect all by myself. Another smallish painting, initially a vertical format, initially based on some snapshots from Canyon de Chelley, in Northern Arizona. That didn’t go so well, so I turned the on it’s side and continued on, still based on those Canyon de Chelley snapshots. DID NOT LIKE IT AT ALL. Out came the sander again. This time the painting morphed into something totally different—based on snapshots from Zion National Park. Two states, 3 paintings on-top-of-each-other later here is what I ended up with. Are we there yet? I sure hope so. 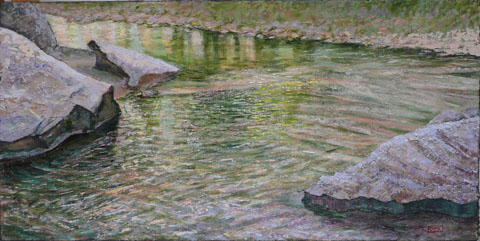 My artist friend, Diana Creighton, came by today to have a look at my big painting. She agreed that it wasn’t done. I knew it, but was hoping I was wrong. She had some very helpful suggestions, so as soon as I finish this blog post, I’m getting to work on this painting. By the way, it’s a lot bigger than the little paintings above, but of course, on the screen they all appear the same size.

And here’s one I just started a couple days ago. 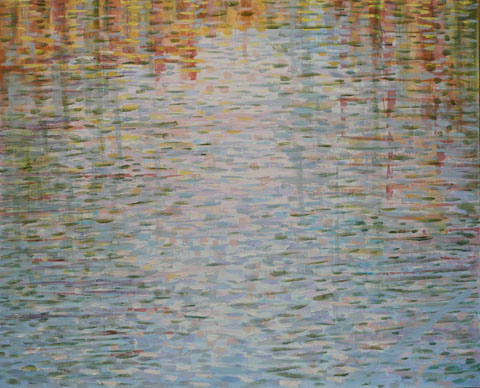