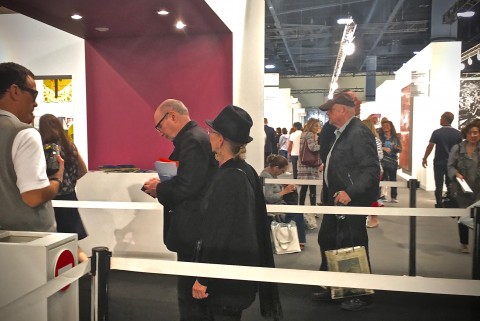 Well, I knew they had to be famous. In my last post I showed a photo of a couple who were very imposing, had a presence even in the crowds leaving Art Basel Miami. My Golden Artist Colors Conference friend, artist Bianka Guna contacted me and said she thought the couple was Jerry Staltz and Roberta Smith, only two of the best known art critics in the country (world?).  I immediately googled them and I think Bianka is right!

Below are photos of paintings from Day 3, Saturday. The buses took us back to the Wynwood District. It was raining hard (again) so I made a beeline to Context and Art Miami again (see 2 posts back for more photos of these venues). I knew from conversations with others that I’d missed a lot of artwork during my first visit. And I had. Below is a (random) selection of what I saw: 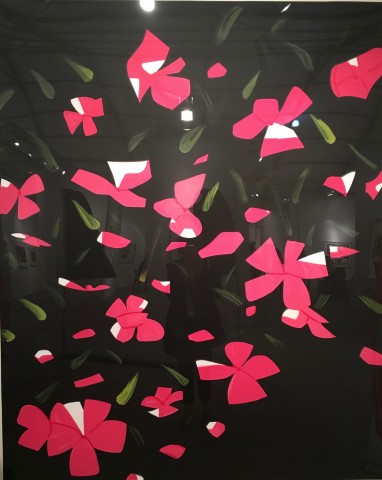 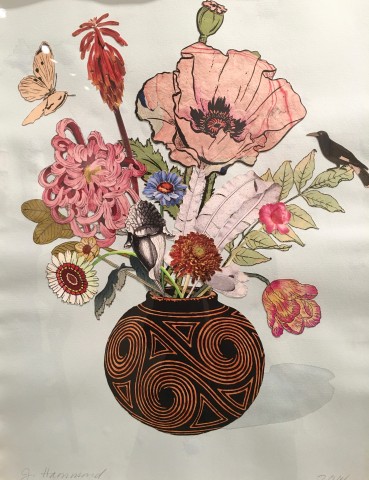 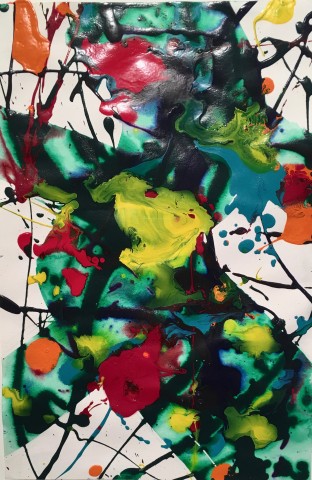 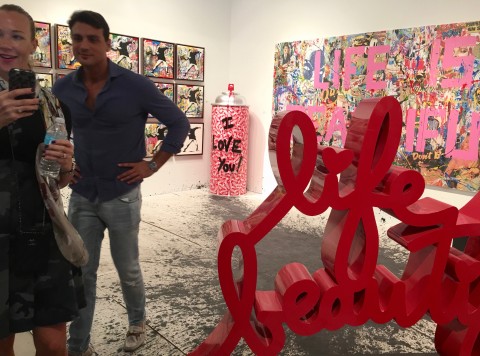 This installation was the center of a lot of attention. I think it’s by Mr. Brainwash, Street Pop artist Thierry Guetta. Please correct me if I’m wrong! 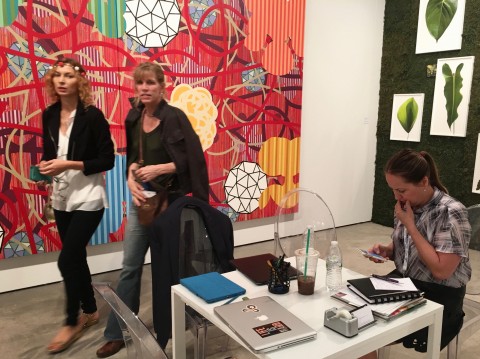 Visitors and gallerist with what I’m pretty sure is a Charles Burwell painting in the background. 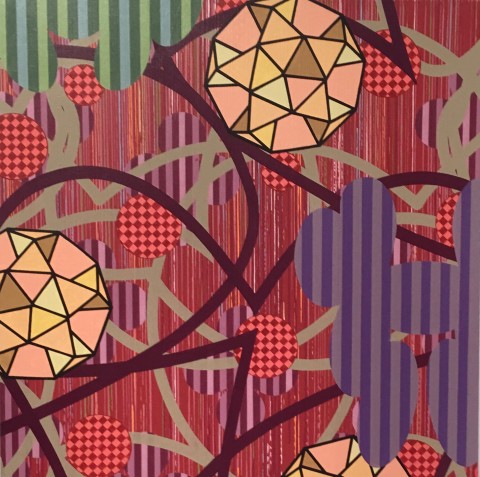 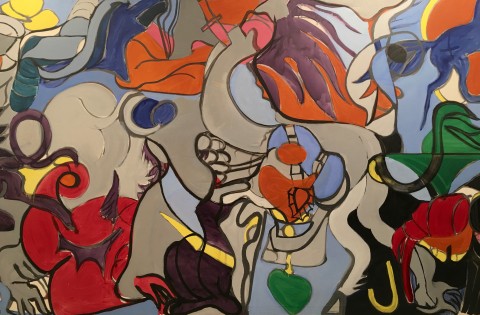 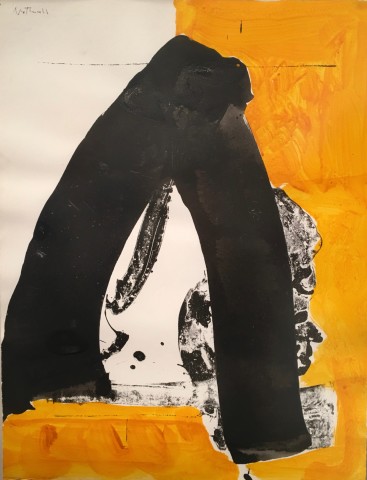 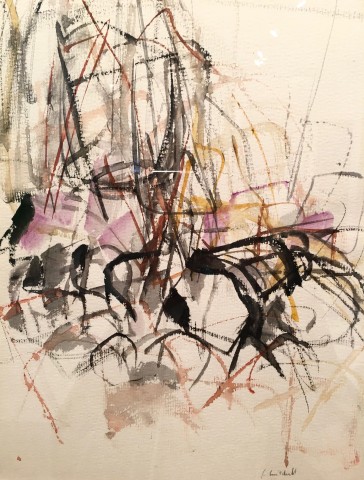 I decided to have lunch in the cafe at Context—Miami Art since I was starving and feeling a bit woozy from all that art. Not to mention it was pouring rain outside. It was bustling but I found an empty table and settled in to eat my lunch. A woman approached and asked if she could share the table. We proceeded to have a conversation. What an amazing person! Sara Baldwin is the founder/director of New Ravenna Mosaics. A bit of her backstory is that she earned her Bachelor’s and Master’s degrees in painting. During this time she created a mosaic piece. Several years later she dreamed up the idea of starting a mosaic company as a way to use her art background in a practical way. She started New Ravenna Mosaics with a handful of artisans as a cottage industry. Roughly 20 years later, the company employs 130 people and occupies 3 city blocks in the historic district of Exmore, VA. The company specializes in custom mosaics in stone and glass. They are beautiful and so is she.

By the time we were done eating, the rain had tapered off. Since I had a raincoat on, I decided to risk the walk to the Rubell Family Collection, which had an exhibition of women artists called No Man’s Land. I failed to take any photos (actually I wasn’t sure if I was allowed). If you’re interested you can click on the link to get a feel for the exhibit. 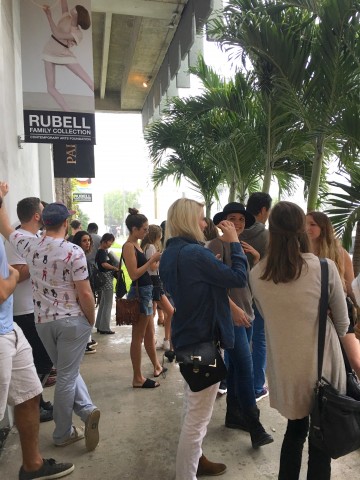 I left the exhibit and outside guess what? It was pouring again and I stood with an ever growing crowd waiting for the rain to let up. When it seemed to simmer down, I made a run for it back to Context. By the time I got there, everything from my knees down was sopping wet. Just as I arrived it started pouring. Inside was a scene similar to Thursday evening (see 2 posts back). There was water flooding onto the floors and dripping starting at some of the roof seams of the tents. A huge crowd of people were gathered at the entry lobby waiting for the rain to calm down. I waited there too, as I’d arranged to meet my Golden friend Vicki Siegel (see last post). Sure enough she showed up right on time. Her husband picked us up (a knight in shining armor) in his car. He was kind enough to fight the traffic and take me on a tour of Wynwood’s famous mural scene. 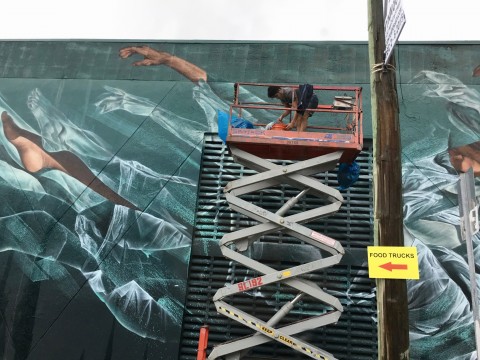 Could this be a famous artist? 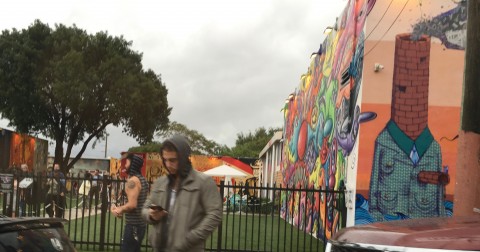 This pocket park is surrounded by murals—Wynwood Walls—with murals by Banksy, Shepard Fairey and more. 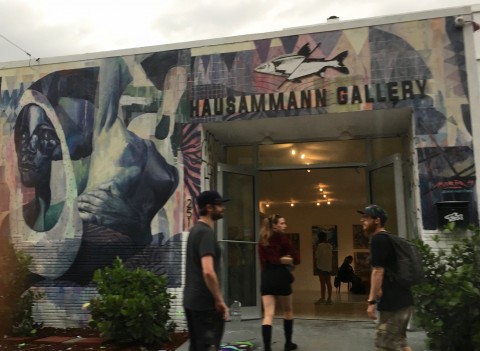 Next up was the opening of the Square Foot Exhibition at the Projects Gallery, which was just across the street from the Hausmmann Gallery (above). Frank Hyder, artist and owner of Projects Gallery started this exhibit 3 years ago, organized to coincide with Art Basel. About 400 12″ x 12″ paintings/wall sculptures were on display salon style showing an international group of artists and including a group of about 50 of the Golden artists. My painting wasn’t on display here because it had been chosen for the Projects Gallery Aqua Miami space (see previous post). 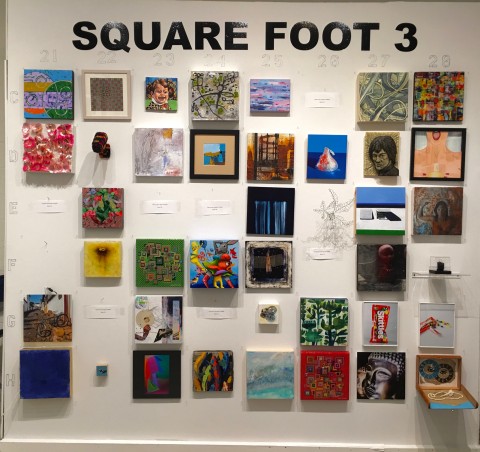 In case you’re wondering the blank spaces are either some of the 24 paintings at the Aqua location or have been sold. 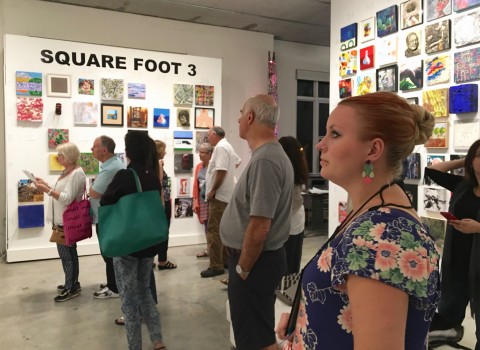 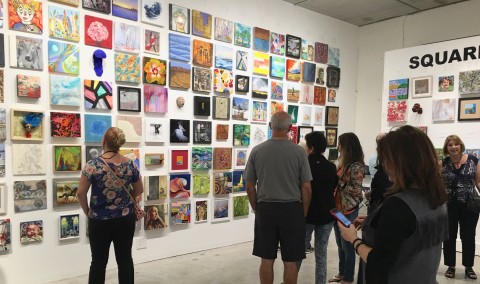 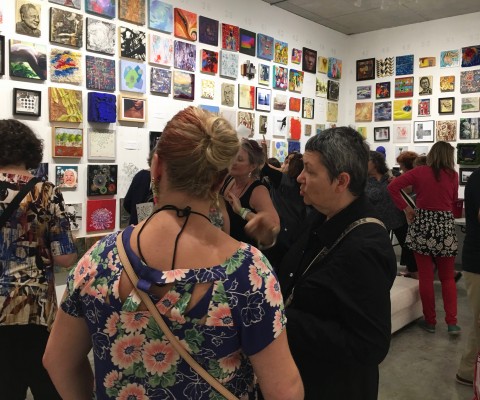 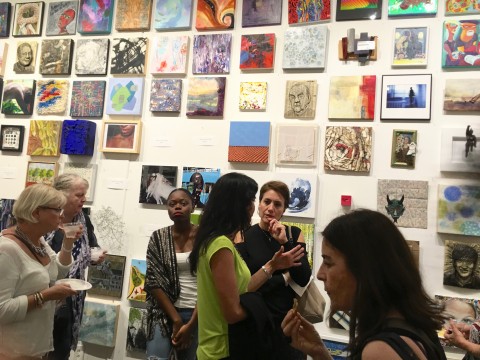 Frank Hyder‘s studio is adjacent to the gallery and he had it open for visitors. It was great to have a chance to see his work in person—always fun to snoop around artist’s studios. 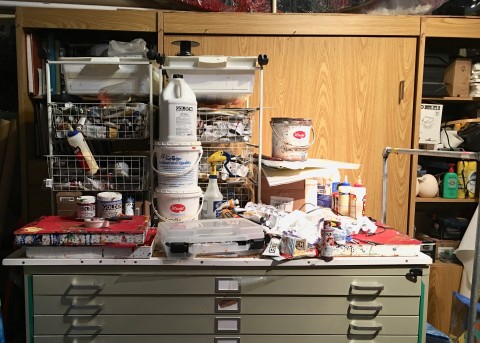 Work table, the guts of the operation. 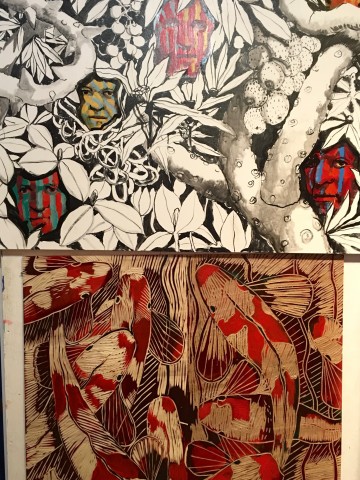 Snapshots of segments of several pieces. 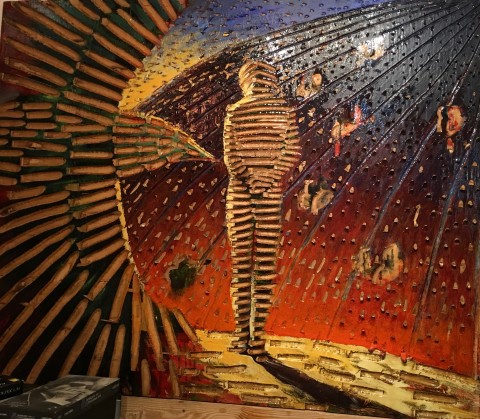 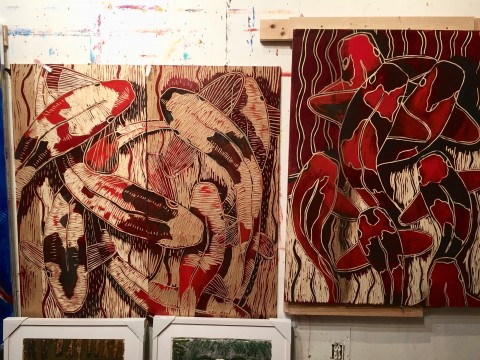 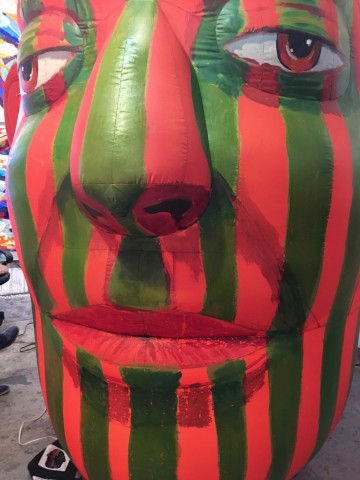 I couldn’t get back far enough in the studio to photograph all of this inflatable sculpture. It’s made of nylon and paint and is part of The Janis Project which has a fascinating story behind it and a great 4 minute video. 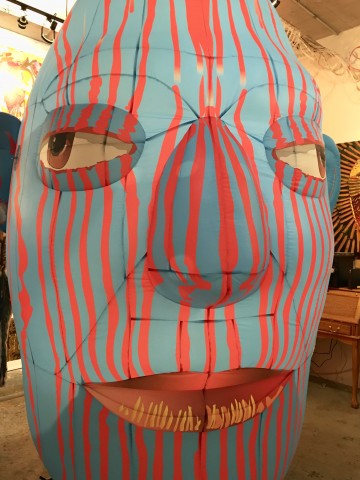 We got back to the hotel, through the rain, via the coach bus.

It was an amazing week and I was ready to go home! Getting home involved getting up at 3am to catch the shuttle to the airport. The sunrise out the plane window made it almost worth it. 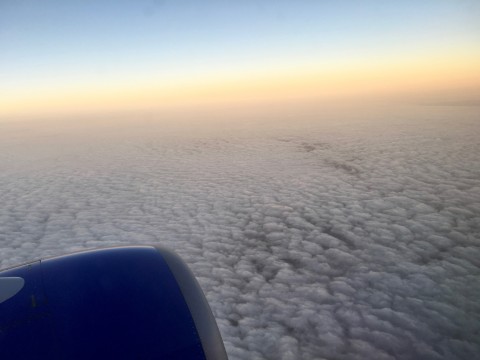 Many thanks to Golden Artist Colors, Mark & Barbara Golden, Patti Brady, Pat Pirrone and the many others in the Golden family who made the Golden Gathering Conference and Art Basel Miami experience possible.  Thanks also to the Arizona Commission on the Arts for the Professional Development Grant. The trip was supported in part by a grant from the Arizona Commission on the Arts which receives support from the State of Arizona and the National Endowment for the Arts.