by Barbara | Apr 9, 2021 | Events & Exhibits, My Thoughts About Art/The Business of Art, Paintings in Progress | 0 comments 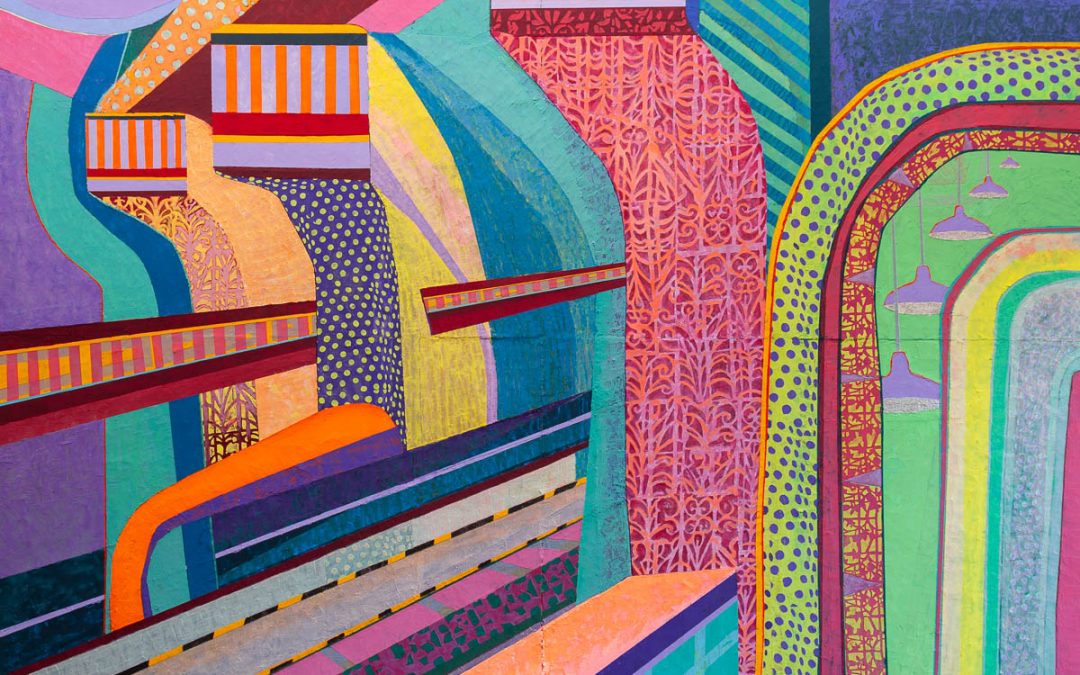 It took over a year to create “Askew #101” at 8’x8′, a lot of paint, a lot of sweat and blood (maybe a few tears). As I went along I tried to document my progress. Sometimes I skipped months at a time but overall I did pretty well in taking the occasional snapshot. Below are the photos I chose to show you, with short captions. Welcome to my brain…Some of the photos of the progress of the painting look similar but if you take time to look closely you’ll see more subtle changes taking place. 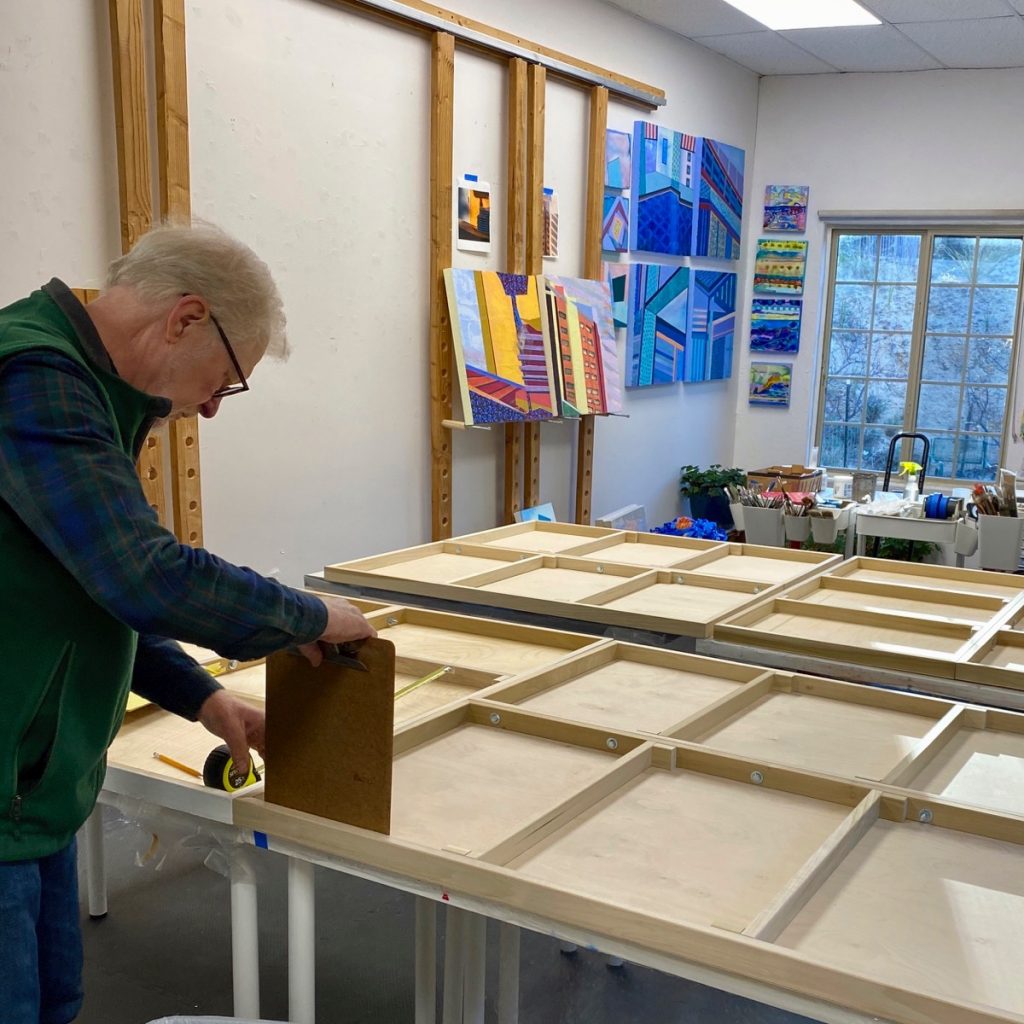 Jim is carefully measuring out where to drill bolt holes on these 8-24″x48″ panels. He did this before I started prepping the surfaces. Using smaller panels meant that when the painting needed to be transported for exhibits, it could be taken apart and the sections would fit in the car (theoretically). 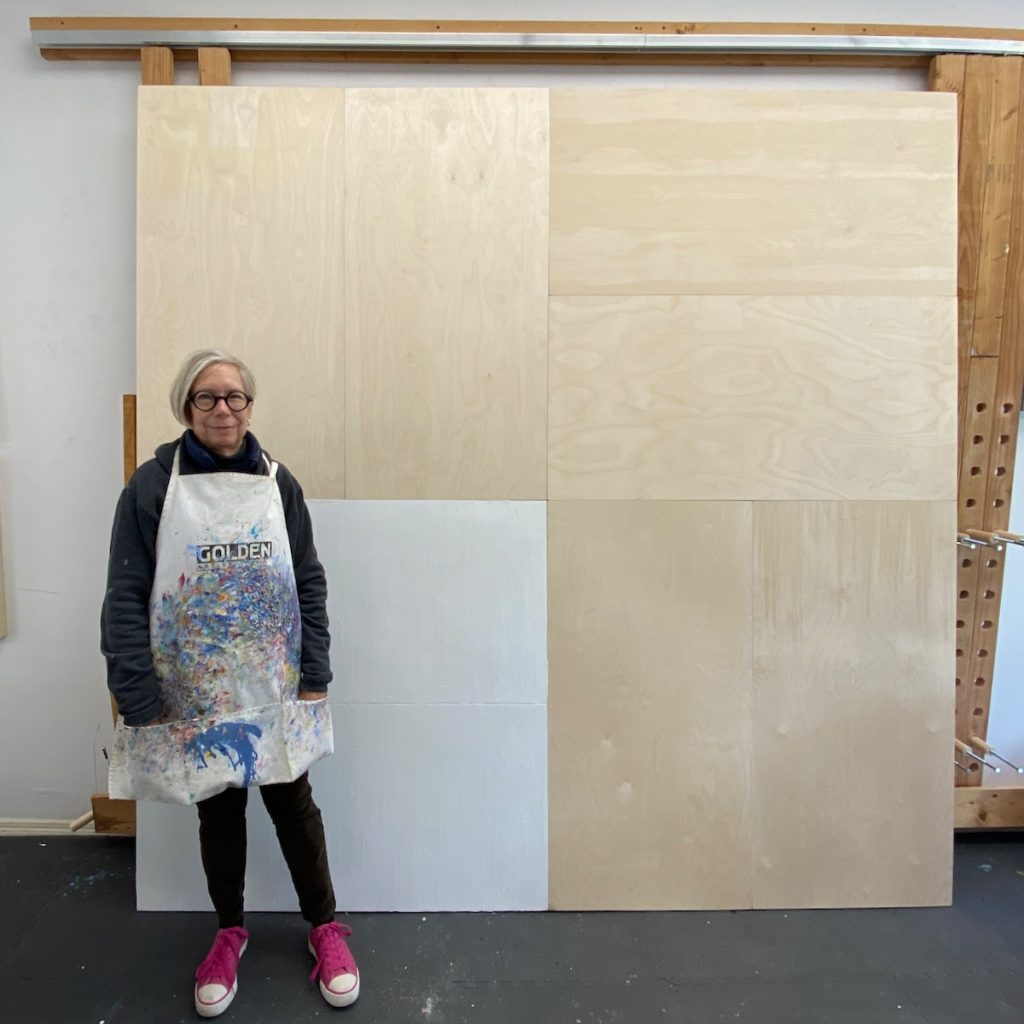 We put it up where I’d be working eventually, just to make sure it would be sturdy and to position it in my studio. Note the beautifully joined panels. 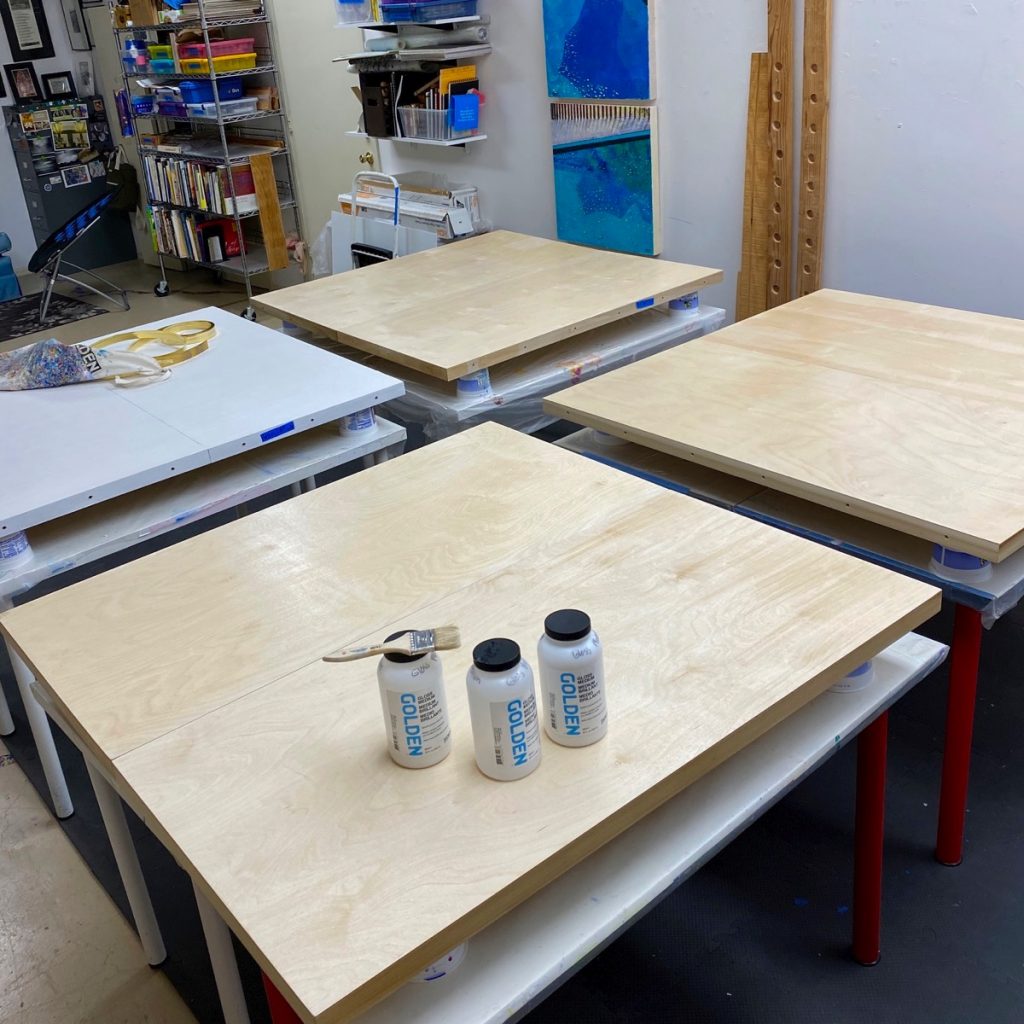 I decided to work on them in 2-panel bolted groups, rather than taking them completely apart. First step is putting a sealer over the wood panels, 2 coats at least. This protects the paint from impurities from the wood that might discolor the painting eventually. 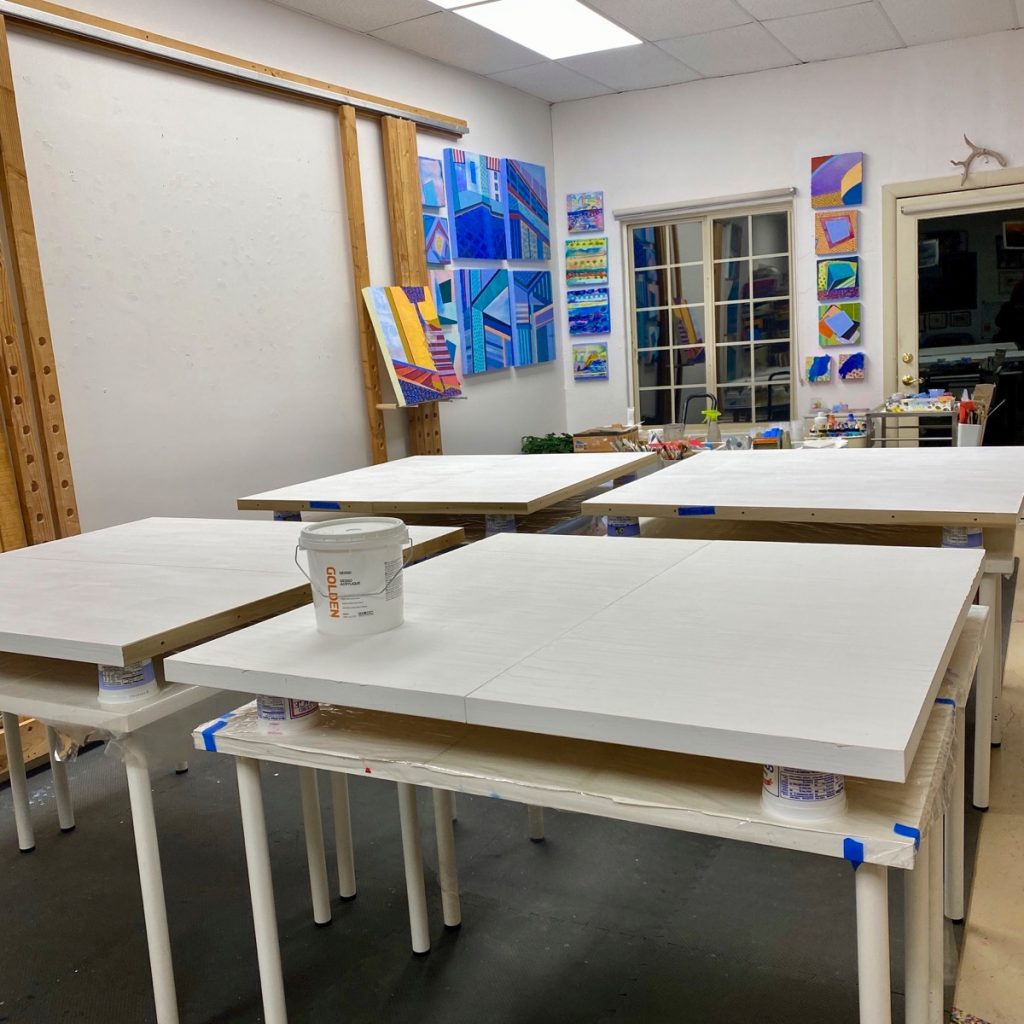 Next step is adding 2 coats of gesso to the panels, creating some tooth (texture) and a nice white surface to begin with. 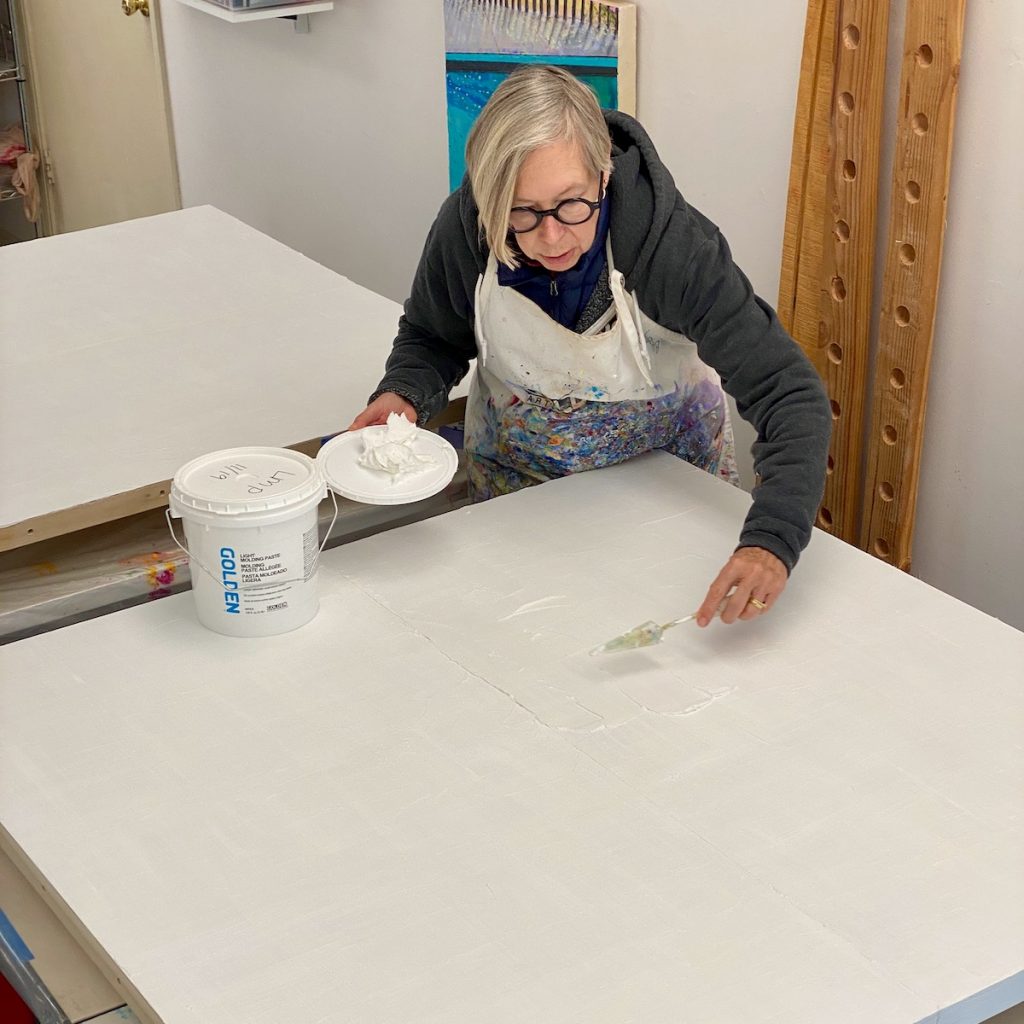 I’m applying several coats of Light Molding Paste, which creates some additional texture and is absorbent. 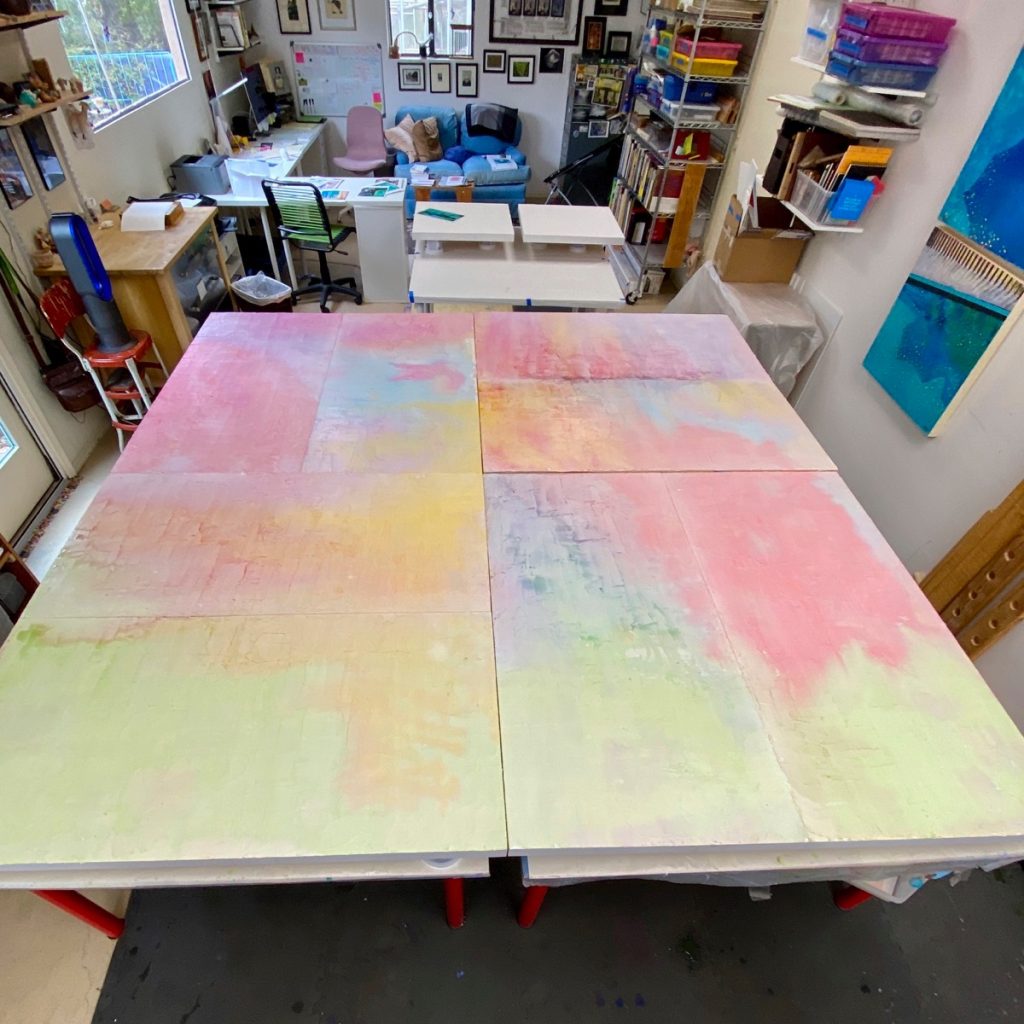 Here I’ve poured washes of water and paint to the panels, let them run and flow together. 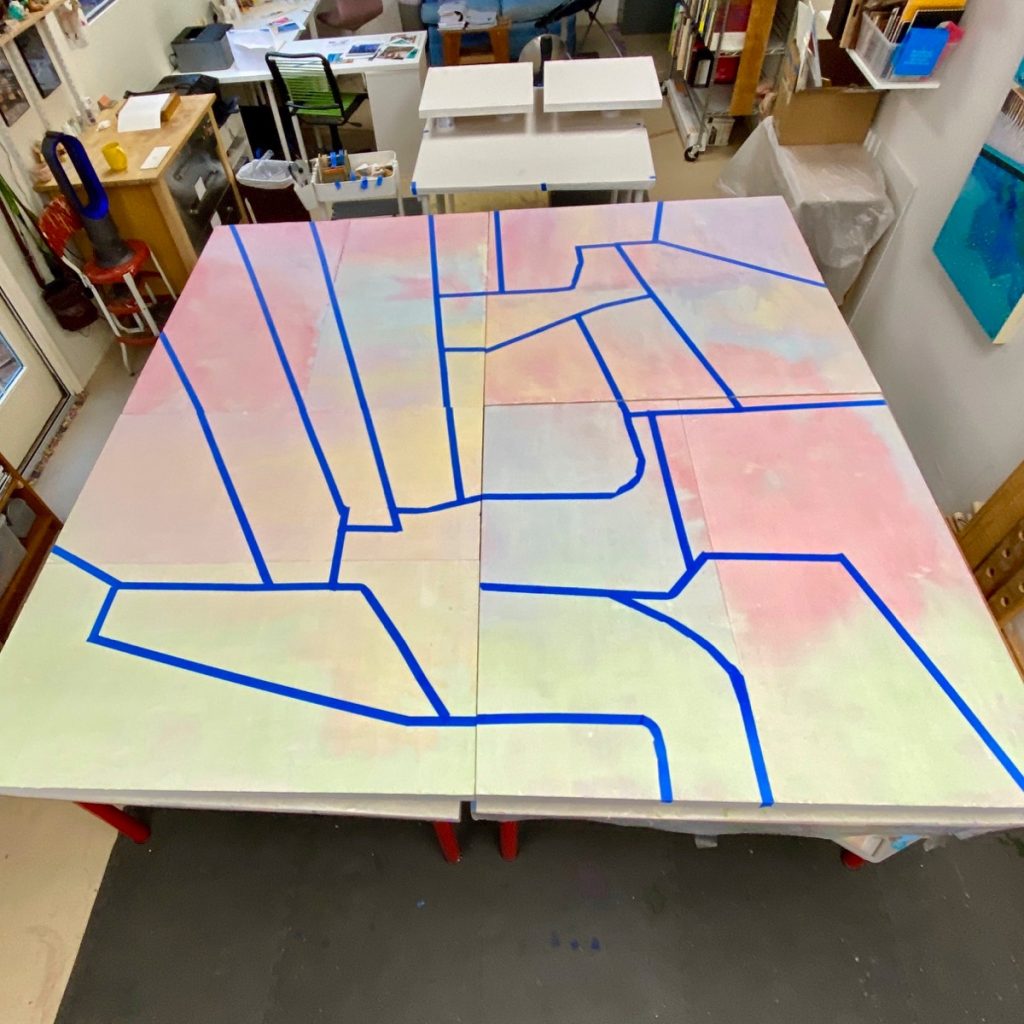 Next, I’m drawing out shapes with blue tape. I begin my painting by working from a photo of an architectural detail. 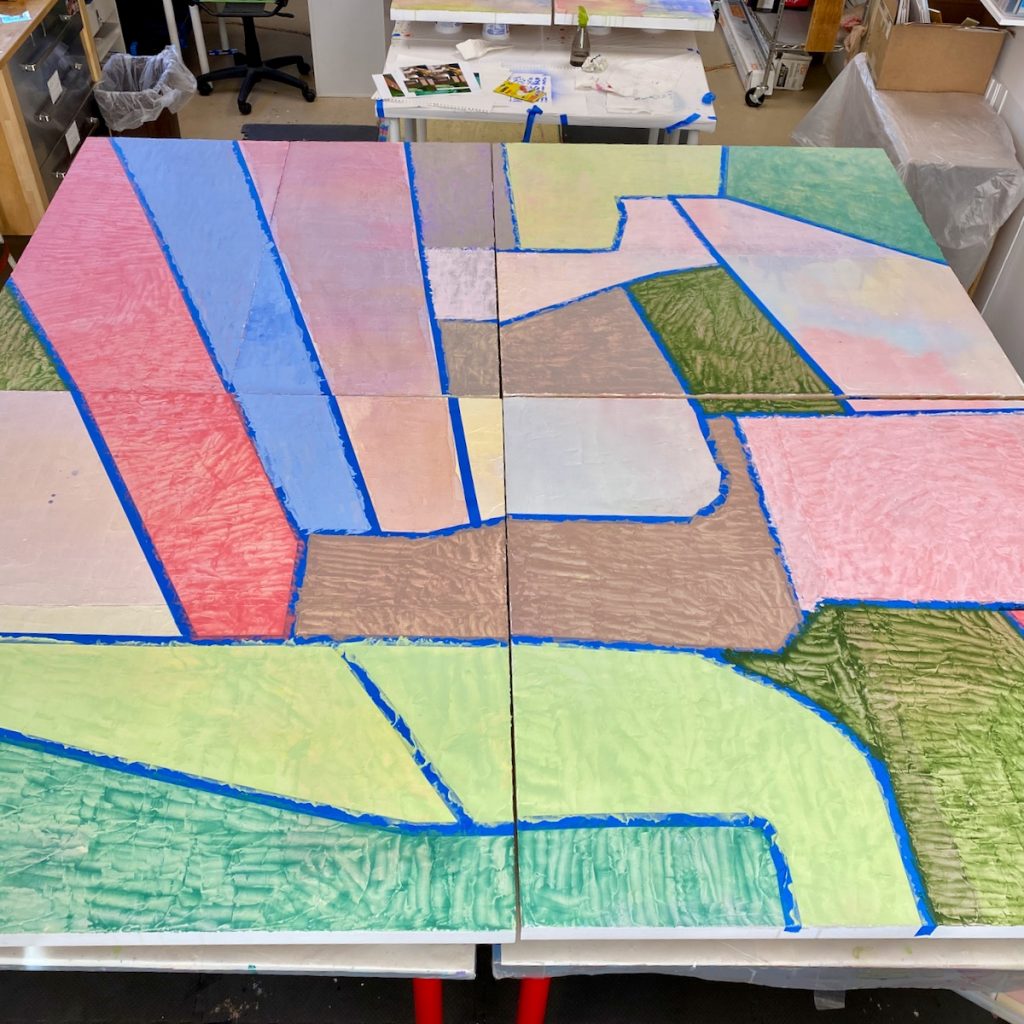 Here, I’ve begun to apply some initial colors, leaving a few of the original washes intact for now. The colors have little to do with the original photo and soon I’ll completely depart from it and begin to problem solve using my imagination. 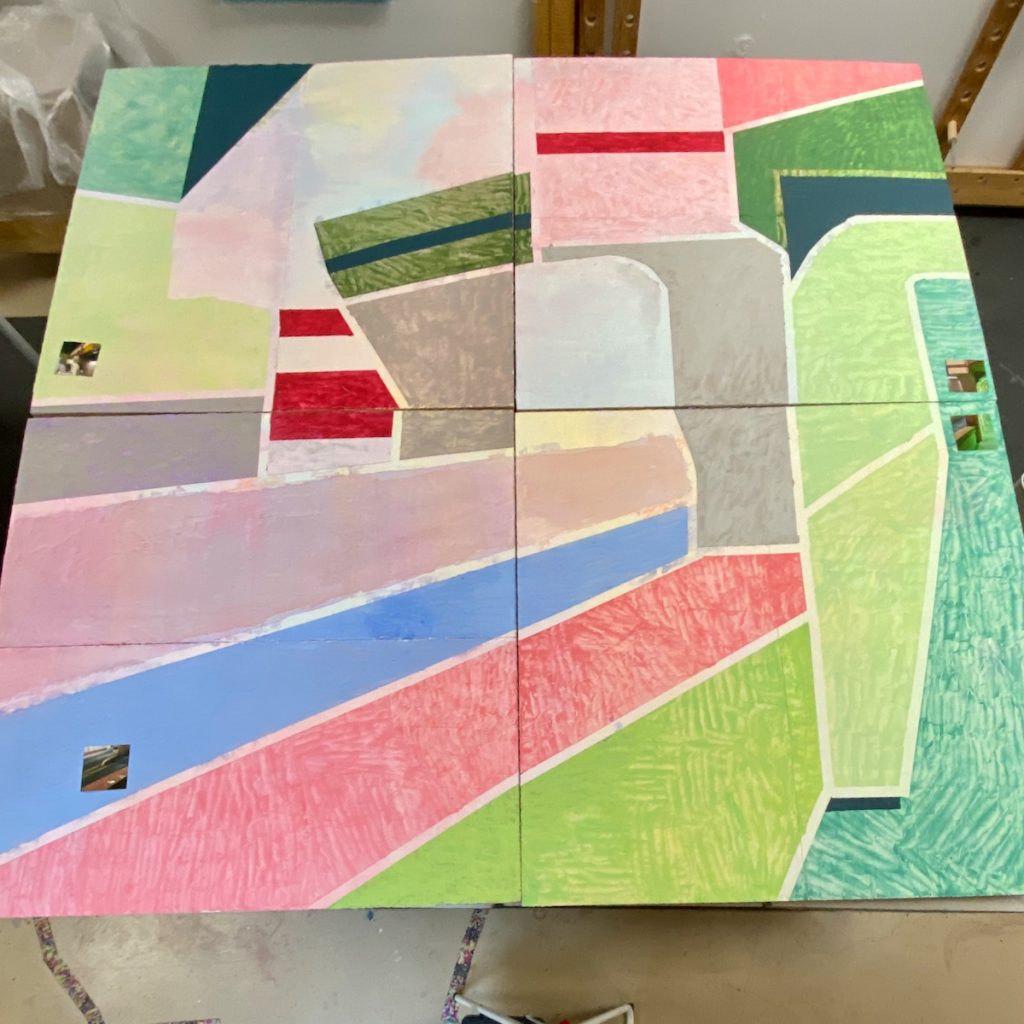 The tape has been pulled off, hence the whitish stripes. I’ve started to subdivide some areas into smaller shapes with color. I have no idea where I’m going with this, other than taking one step at a time. 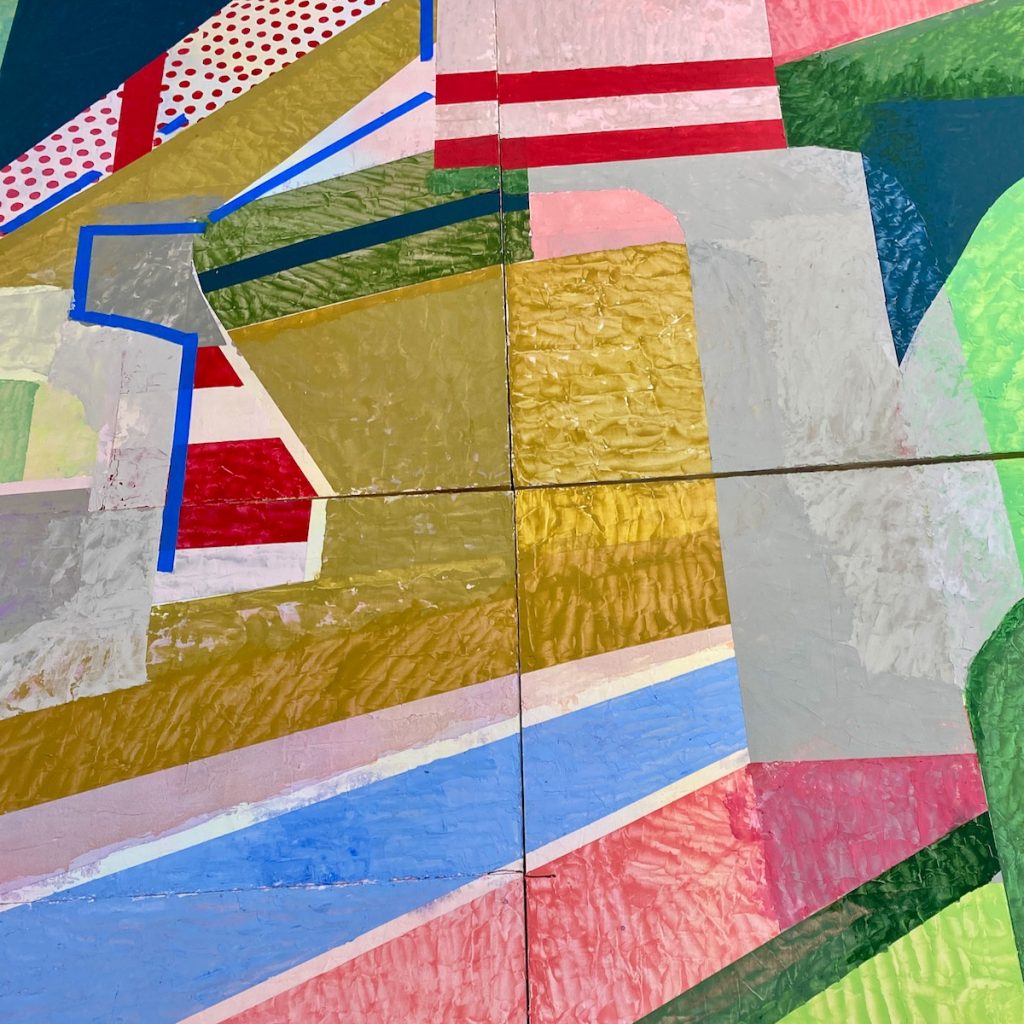 Kind of a big leap from the last photo. I’m starting to work on depth and adding some pattern and more shapes. 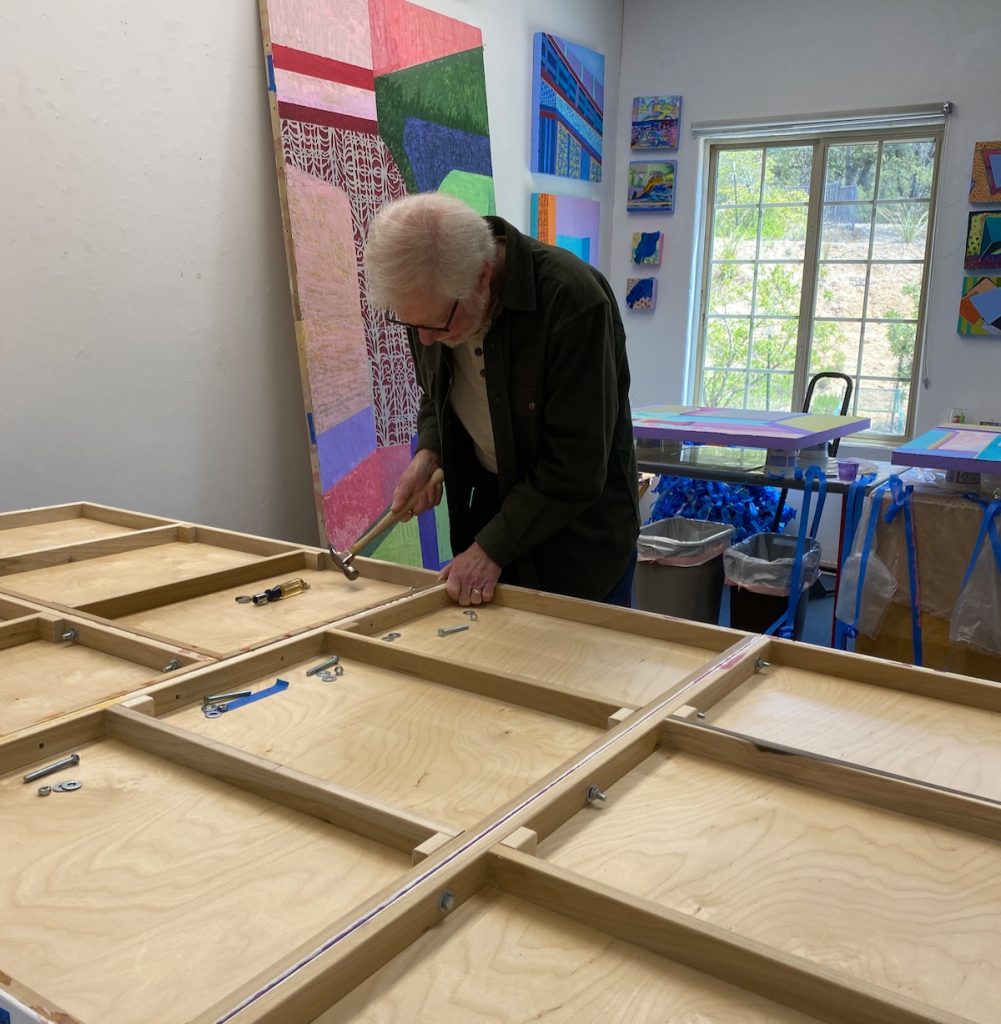 At this point, Jim is back on the scene, bolting the whole ensemble together. 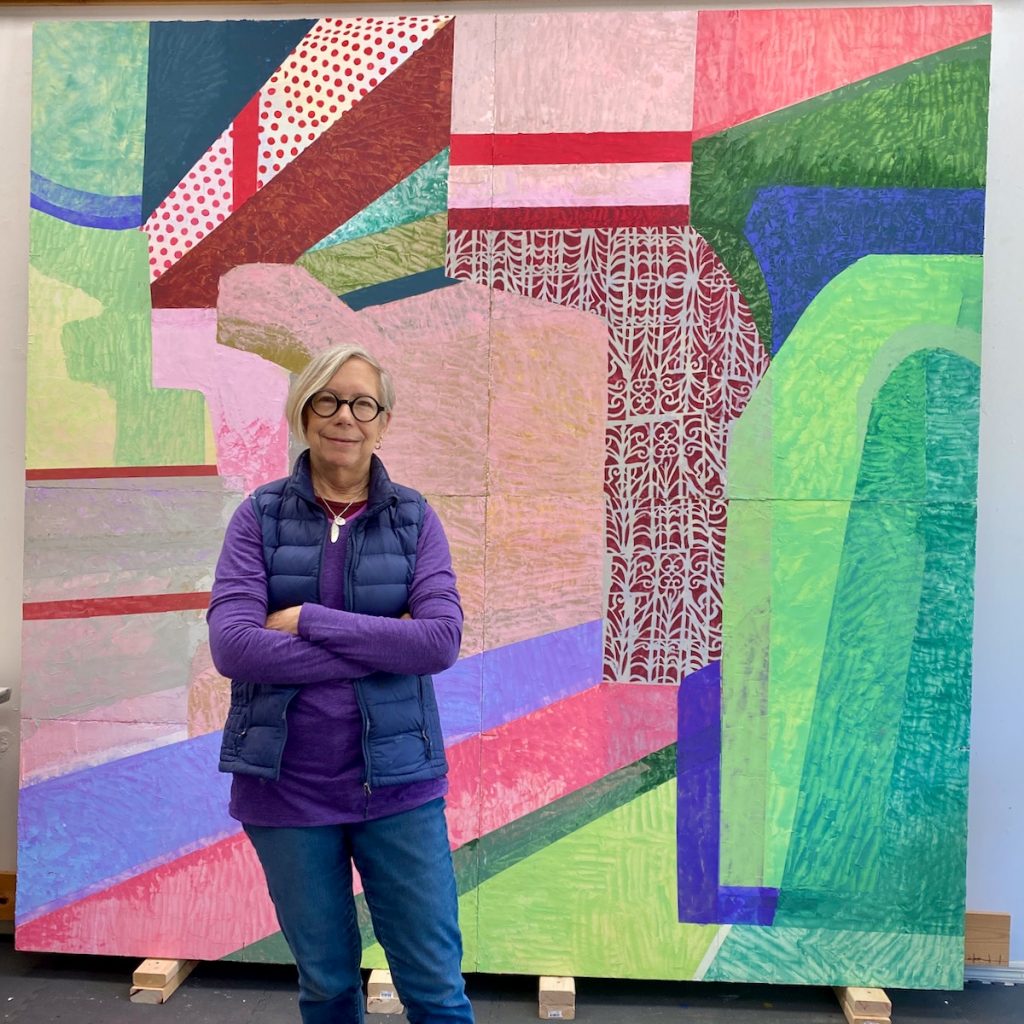 Upright at last. From here on in, I’ll be using a ladder, be on my knees and standing when I paint the areas I can reach. I can finally see the whole painting and step back a ways to check it out as I progress. 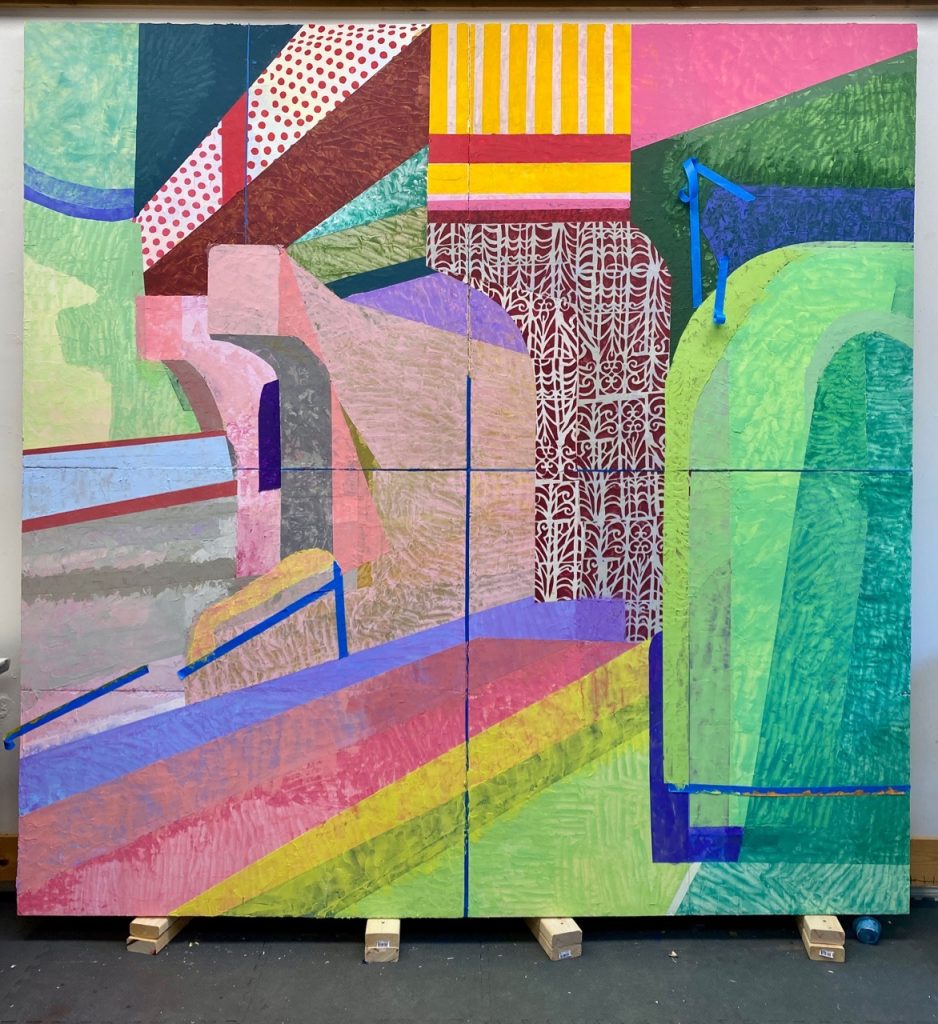 More work has happened. If you scroll up and back down, you can check out the changes. 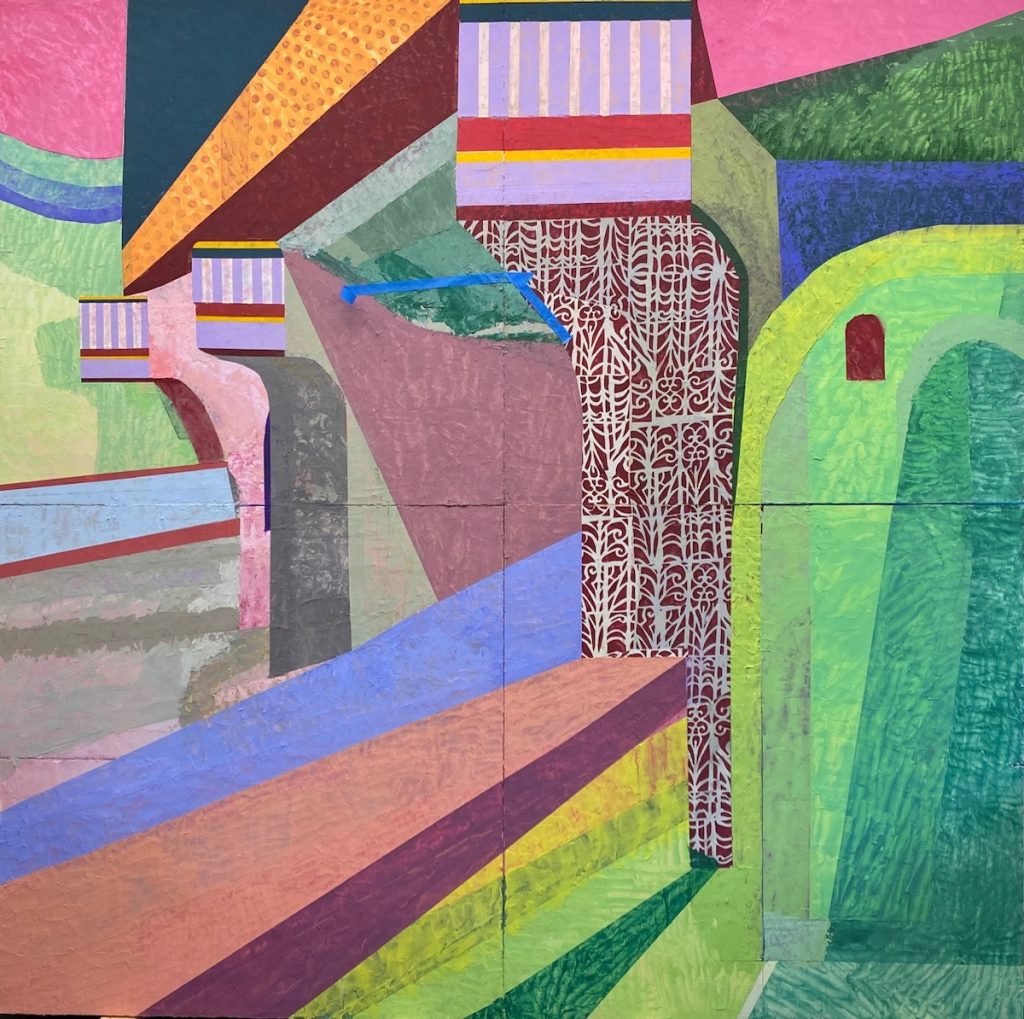 Hmm. I don’t remember having that little red door looking thing on the right side. Must have gotten rid of it pretty quickly. 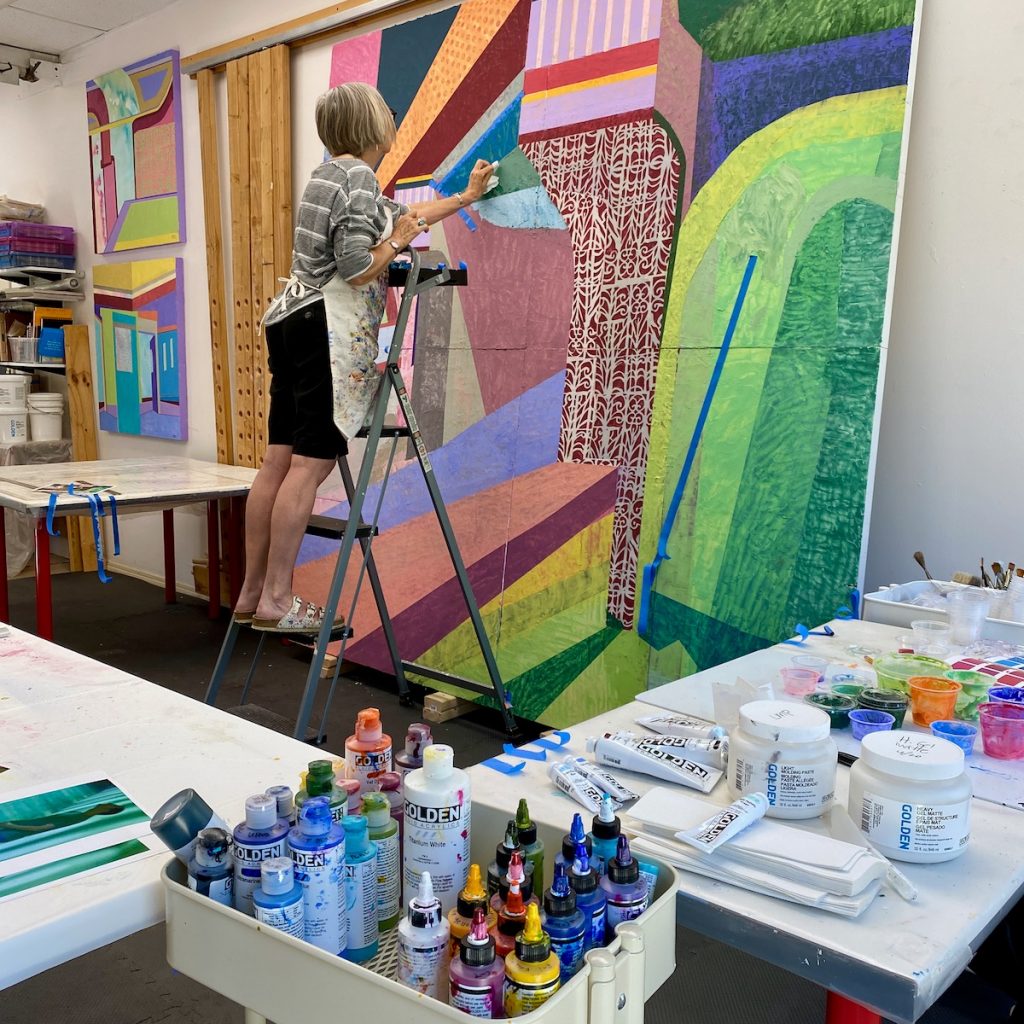 Up on the ladder working away. 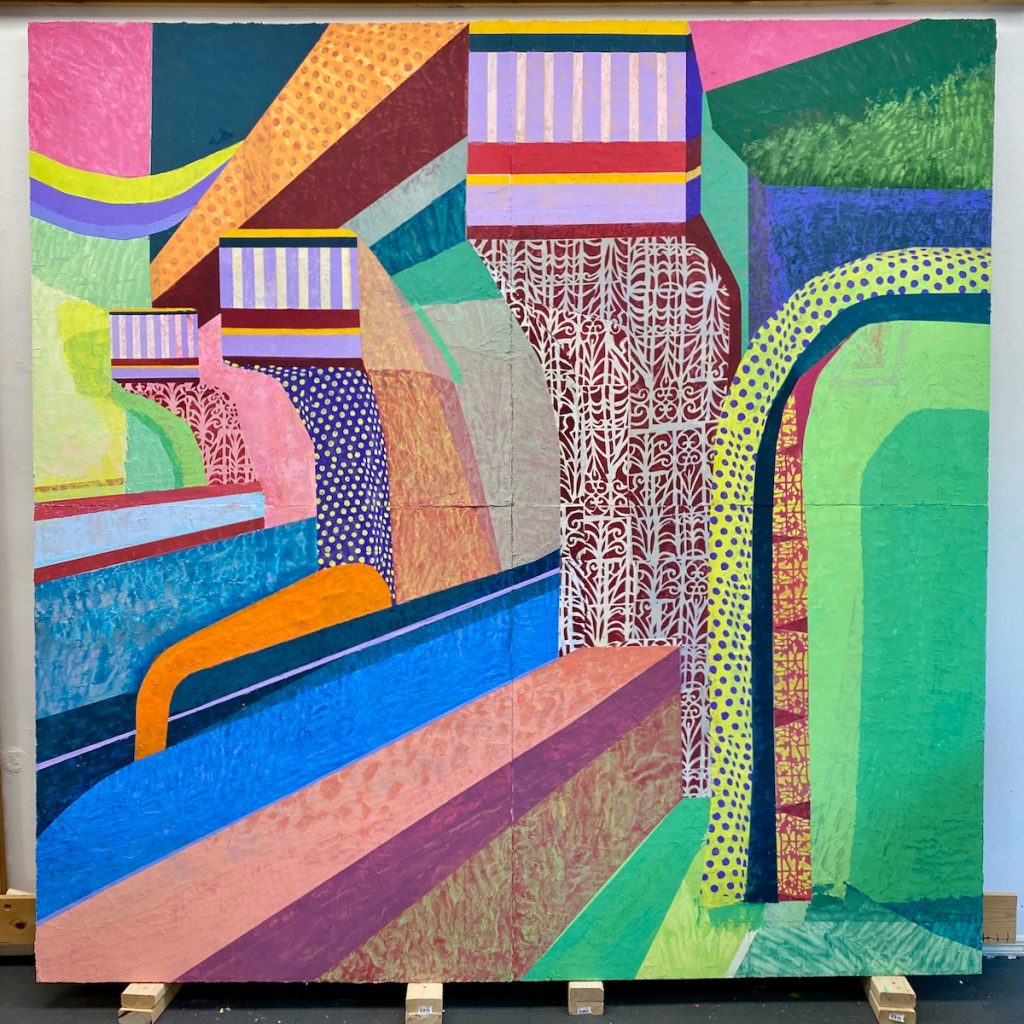 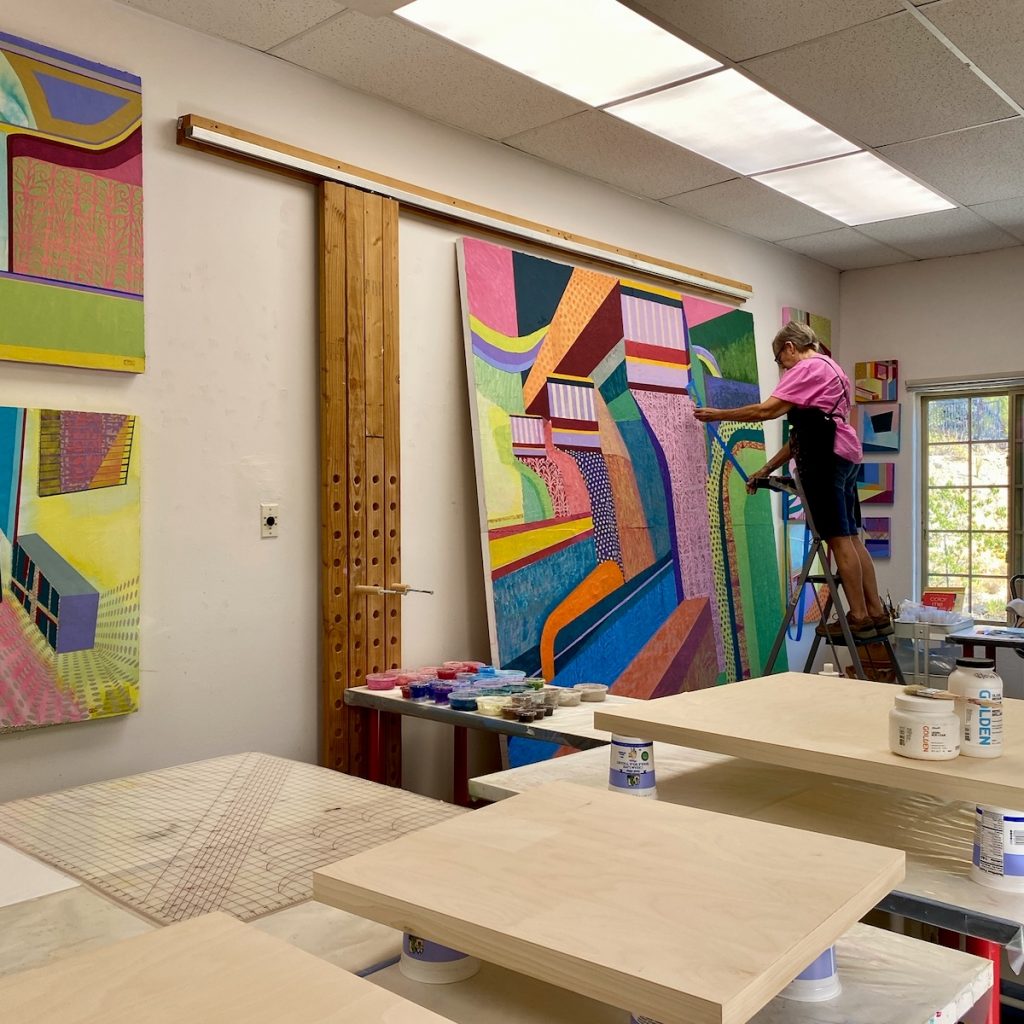 Up on the ladder again. I’m beginning to work on details rather than large swaths of areas. As you can see I’ve got some smaller panels waiting to be prepped in the foreground. I like working back and forth between a group of paintings of different sizes, especially when I’m stuck. Occasionally a solution comes to me and I rush back to the big painting to tackle it again. 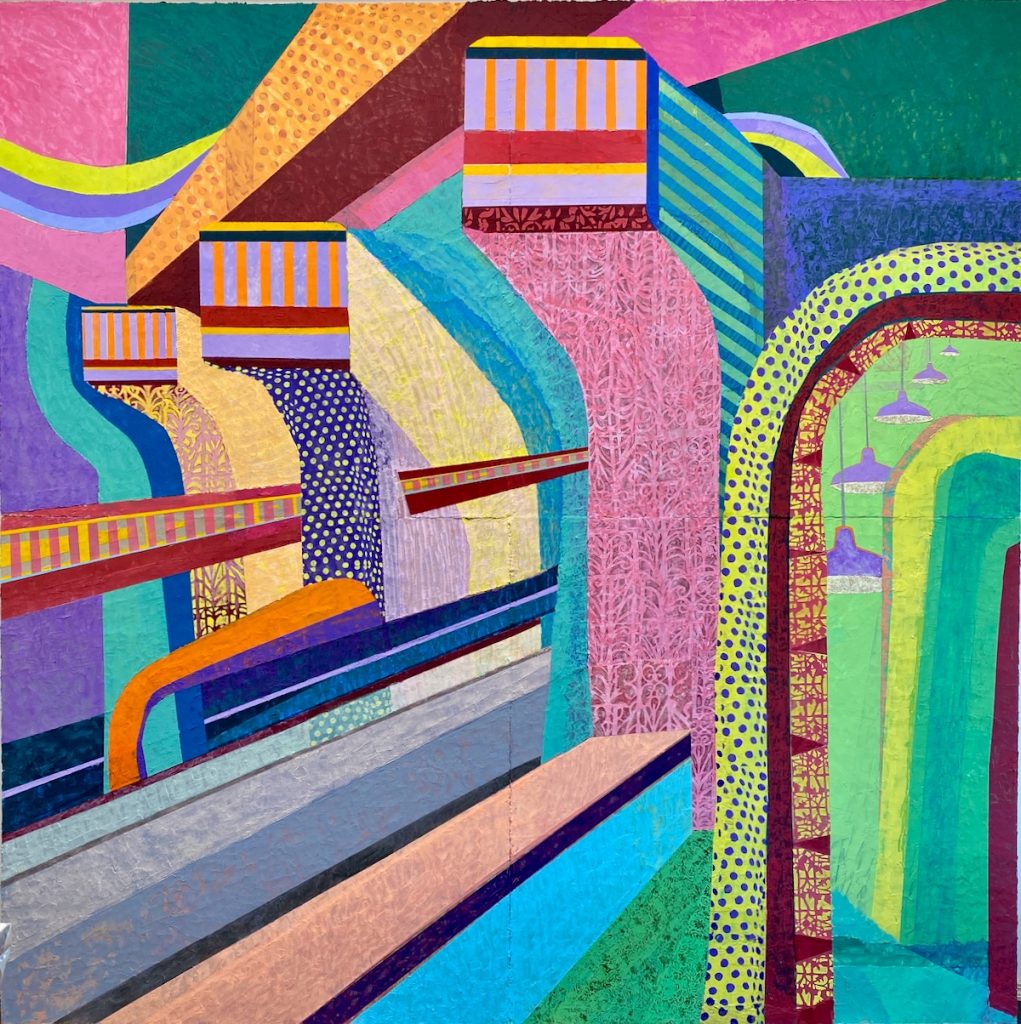 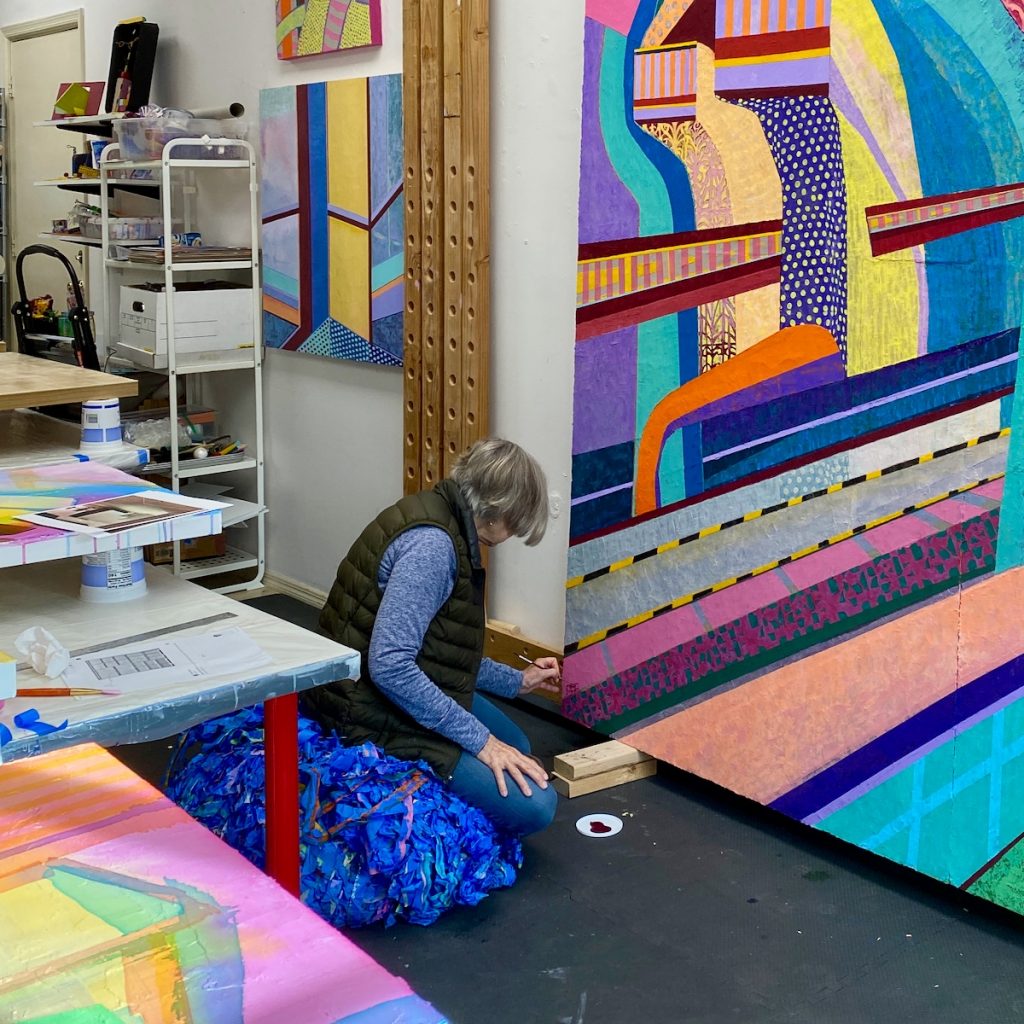 At last I signed the painting. 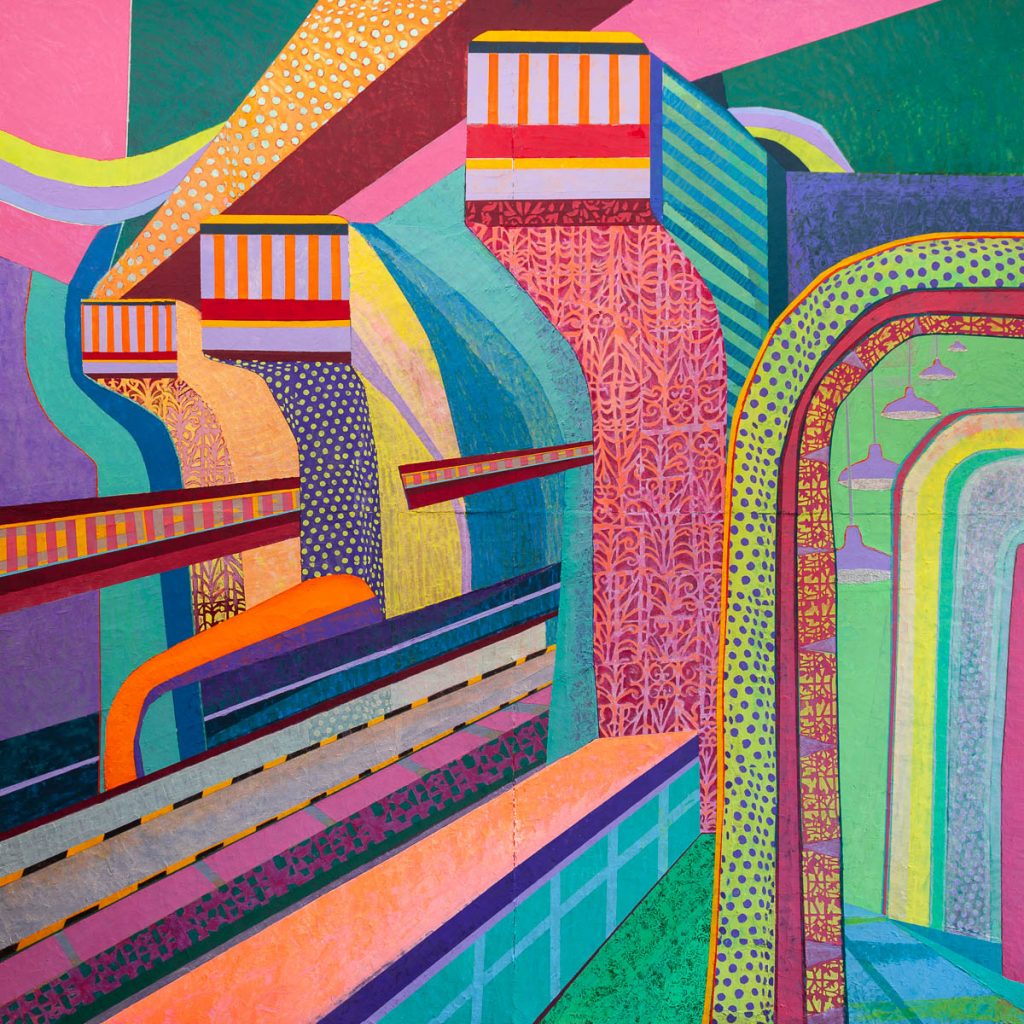 And here is the officially photographed, completed 8’x8′ “Askew #101”.

Currently on display in the Artlink 21st Juried Exhibition at FOUND:RE Contemporary Gallery, in downtown Phoenix, through June 13th.